Favorite vehicle you have ever owned


I'm rather fond of this old GMC. Lots wrong with it, but you can't beat the hauling capacity and the wonderful dump bed!
Click to expand...

Is that a diesel 4x4? A neighbor had an 83 3+3 4x4 dually that he transplanted a 6.5L in, that thing was a loud, rattly truck, but it could haul plenty.
TheBrushSlasher

Woodslasher said:
Is that a diesel 4x4? A neighbor had an 83 3+3 4x4 dually that he transplanted a 6.5L in, that thing was a loud, rattly truck, but it could haul plenty.
Click to expand...

A buddy of mine has an 83 one ton flatbed 4x4 that he had converted to a 6.2, those are well made trucks.
Maintenance supervisor

I miss my Geo Tracker. Good fuel mileage and plenty of room. Til a young kid not paying attention didn't notice I was stopped to turn. It was sentamental to me being my late father in law's. 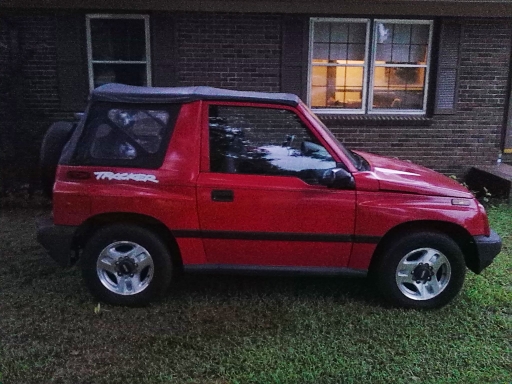 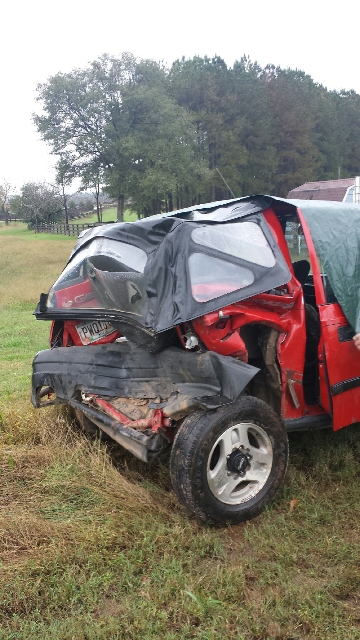 old CB said:
Slant six engines-- Chrysler/Plymouth/Dodge--got me thinking about my first. Paid $200 in 1974 for a Plymouth Belvedere with 96,000 miles, which was seriously geriatric in those times. But this one had new brakes, muffler--and maybe shocks?. We called it "the green limousine" because it was a smooth ride next to my '62 3/4 ton Chevy pickup that bumped down our dirt road like a hay wagon. We loved that vehicle (if it still exists on the internet there's a story I published about 20 years ago "the green limousine"--nope, apparently Exquisite Corpse is gone).

One winter ('77, '78?) I worked as a milking hand for a dairyman, 6 miles away. Which meant that I had to leave the house early to be at his barn for milking at 5 a.m. every morning of the week. Several miles from the Canadian border (NY) it got chilly--it was nothing to wake up to 20 below zero. We had no electricity or plumbing at our place, so you couldn't plug in a block heater for easy starting. I had that worked out however.

Every morning when I got up and started coffee (4:15 or so?), I raked out the bed of coals from my woodstove into an aluminum turkey roaster pan, carried it outside and slid it under the car, right under the oil pan. About 20 minutes later that thing started up like it had been in a warm garage. Damn, I was proud of that system. Was driving home from milking one morning around 9:30 and stopped where an old-timer was struggling to get a vehicle started. He gestured to my Plymouth and said, "What, do you take that thing to bed with you?"

Proud as hell all winter until the spring when it started trailing blue smoke out the exhaust. I learned that the excess heat from the coals had cooked the oil. Killed that engine.
Click to expand...

I had a '66 Plymouth Valliant, slant-6
Great little car.
TNTreeHugger

I'm thinking of buying a 2003 Trailblazer.
Anyone have an opinion on that vehicle?
Andyshine77

The L6 engines are know to lock up.
bullseye13

I was seriously considering one last year but the boss says that's too old. Pre 06 were good for frame rot above rear wheels in my area just keep an eye out. Know a guy with an 03 that's perfect inside and out and don't think ever gave him any real trouble. I bought a 16 equinox and it's COMPLETE TRASH, do not buy.
The trailblazers were the last of GM's affordable real SUV's you could actually tow with, that had 4wd. Many family members had them and they ran forever. Fuel mileage is about 14. Maybe the newer Tahoe's you can tow with and have 4wd not sure, they are expensive. New vehicles don't make me happy lol
Maybe consider an 06-08 trailblazer if you want some options. They had the modern optional conveniences like xm radio, heated seats, and a few other modern creature comforts. That was my primary search but they were all trashed. And the boss said no.
buzz sawyer

1965 Saab 96. 2 cycle, 3 cyl. 4 speed, front WD. Engine had 7 moving parts. Had to change the clutch once - unbolt the engine and lifted it out (by hand). It also had a free-wheel transmission selection. When you let off the gas, it would coast forever.
50blues

Owned a lot of vehicles over the years . The 1995 Plymouth Neon has been the favorite . Will go threw snow. Great on fuel always starts its so old I don't care if I have saw dust an mud all over place . If I get to retire I will get a nice clean car no way getting anything nice until then . If it makes it the car will be 30 years old with little repairs .
tla100

Really never had a big favorite.

Drove my Brothers '73 Duster in high school a couple years with a 360 and 3.55 gears. Snot green, not so fast but beat a few 5.0 stangs, Novas and Chevelles. Had 1/4's rusted and crap suspension. Did actually had some hotties in there.

1986 Subaru GL maybe? 4 door hatchback that my bro rolled. Dents all over, threw a new windshield in. I dinged the front bumper and passenger door on 2 separate icy roads not long after 16th birthday. Had 4 wheel drive, 4 on the floor, 3rd headlight. Defrost never worked. Clutch went out. Had fun in the snow.

Now would say my 2005 Ram 2500 with a 5.7 Hemi. Starts all the time. Very little fixing. Sucks gas. Hauls whatever I need to. Fits the family, but not so comfy and ride sucks. Rusty, loud, and ton of miles.

The old farm truck was a '76 Chevy Cheyenne 1/2 ton, 350 2 bbl. 2 wheeler. Man that thing ran and ran. Lots of battery connectors, but always ran great. Interior and seats were shot, stunk, rusted out. Piss yellow with white on sides. Tailgate just destroyed/dented along with bed. That was our nice truck for years. I really miss this the most. Hauled literally tons and tons of tree branches, appliances, scrap, wood, junk and anything else.
edisto

I'm only on my 3rd vehicle (my former and current wives have been through a few). When I was 18, my "wages" for working the summer on my uncle's farm were his abandoned '66 F100 with the inline 240. Driver's door caved in by a front-end loader, and you could watch the road through the floorboard. Limped it the 600-miles home. The fuel line was a bit rotted, so i had to keep stopping, cutting it back and reattaching it. It was stretched pretty tight before I got home. Rebuilt the engine, and a few other bits, but I left it at my mom's place when I went to the US for graduate school 6 years later. I let her sell it to a young kid for $250 a few years back.

I bought my next truck, a '78 F100 for $1800. It got me through 5 years in North Carolina, 8 years in Kansas, and 5 or 6 years here. When the engine went, I could have rebuilt it, but 78 had always been too new for me, so I sold it to the wrecker and started looking. I found a 1968 F100, stepside with the 240 that had been stored for the past 10 years. I thought that I would have a max of 3 years before I needed to rebuild the engine, but it ran just fine for 6-7 years. Between the pandemic and my wife's old car (late 90s Corolla) needing exhaust work, and her current car (mid 2000s Vibe) needing a new transmission (I put a 6-speed in), I still haven't pulled the engine. I'm going to see how much bumping it up to a 300 will add to the cost, but I think that my current truck will wind up being my favorite...especially if I can find a 5-speed to put in it.

As for some of the vehicles mentioned previously, my dad had an '83 Toyota 4x4 that was indestructable, and would go anywhere, and my previous wife had a late '80s Bronco II that was a great vehicle while we had it.
old CB
O

Hole in the floor of the car . . . takes me back. 1970 I lived with a bunch of folks at an old farm in NY near the Canadian border. We had a '58 Volkswagen bug convertible that had its peculiarities, mostly having to do with rust & rot. The battery in those cars was beneath the rear seat, and sometimes the seat springs would sag and short out the battery causing a brief fire. There was also a sizable hole in the floor so anyone in the passenger seat had a good view of the road below. Which explained what happened to me one night.

We were headed for town and passing thru a marshy area with thick, spooky fog. I was in the back seat, stoned to the gills (we smoked a lot of weed back in the day). It wouldn't have been so spooky, except that as we drove through it I felt a hand grip my shoulder. Scared the piss out of me, as I was alone in the back seat. Turns out our cat had crawled thru the hole in the floor and bedded down in the luggage area behind the seat, and when she emerged and gripped my shoulder . . .
unclemoustache

Woodslasher said:
Is that a diesel 4x4? A neighbor had an 83 3+3 4x4 dually that he transplanted a 6.5L in, that thing was a loud, rattly truck, but it could haul plenty.
Click to expand...

1994 Ford Explorer....bought cheap, threw a bunch of money at it and got 5 years and 100,000 miles out of it. Made lots of hunting trips out west in it. Great memories. Blew the transmission in South Dakota on a prairie dog trip and came home in new 2016 F150. My son, 25 at the time, was with me and was in a panic over the trip being screwed up. The look on his face when he finally realized I was buying my first ever new vehicle was priceless.
medalist
M

Favorite might not be best but had a '62 Willy's pickup with L head 6. Previous owner backed it over snow bank and put a perfect factory looking spare tire dent in fuel tank allowing about 9 gallons or useable range at the midst of early 70's gas crisis...allowing only odd/ even gas purchase.
Now that I'm wiser I have 2 Toyota 4Runners...an older 2006 and my newer 2008 but between them just shy of 500,000 miles. 100% Japanese build and parts I hate to note. These are 4th generation machines...2003-2009 and all very similar and good interchangeability.
The 06 still looks new and they both drive very well.
If you have a kid and need a first vehicle this is a good consideration.
Not unibody construction as in Highlander.
old CB
O

BTW, I found my old story about our '64 Plymouth Belvedere. We paid $600 for it, not $200. (apparently can't edit a post after a certain time.) Have got to the age where memory tricks me on details. The car was 10 yrs old & very reasonable was the main point.
Ol' Brian