rupedoggy said:
ssm1699 I think these guys have the 044 mixed up with the 046. The 044 has a sleeve that needs to be on and tightened down before the test. I don't think the 046 does. People are so anxious to help they sometimes get mixed up. Mike
Click to expand...

Correct. 044/440 have the sleeve/bushing setup that requires clutch torque to properly set. The 046/460 saws do not utilize this sleeve/bushing and do not require the clutch to seal the pto side.

1128 series have had a lot of major changes throughout their run.
ssm1699
S

This is why I was asking how much I should have sticking out of the flange. It is just a hair over 3/4" long. I would think is needs to be our more, but I could be wrong. And as you can see, there isn't a stop on the stud. 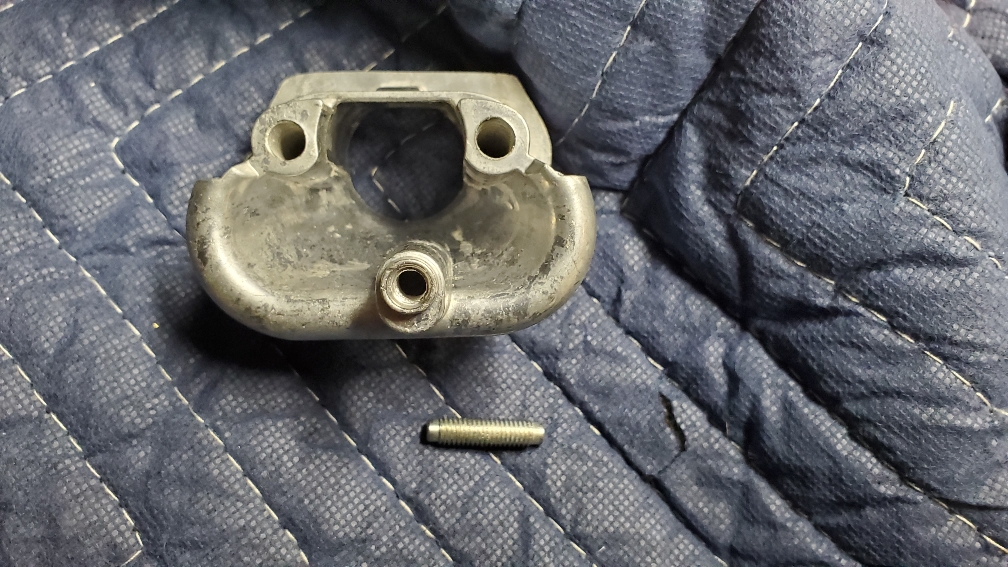 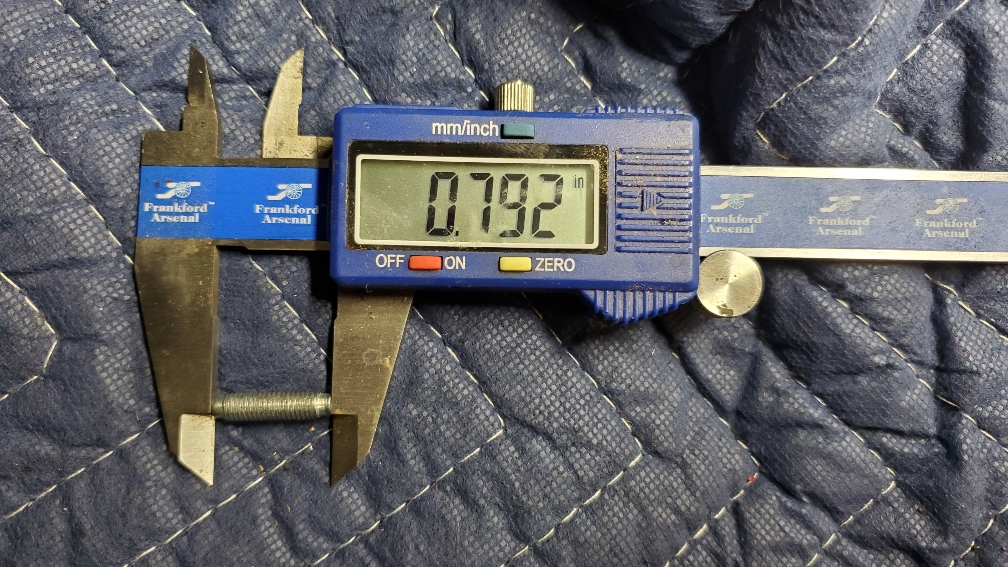 I just measured a stock one for you and it is sticking up .4 of an inch above the highest part of the part. mike

Thanks Mike. Exactly what I wanted to know. I realize that oem would probably be more ideal, but budget sometimes dictates things. That is why my not so critical parts are cheaper AM parts. But the good thing is that the heart (i.e. crank, case, piston, cylinder, wrist pin, wrist pin bearing and crank bearings)of this saw are oem, except for the piston rings. But they are at least caber rings. It does have oem chain brake parts and oil pump too. Everything else is AM, which I figured I could get away with, since I have a totally AM farmertec MS660. It runs beautiful. I truely do appreciate everyone's input and knowledge, especially since this is my first time with this series of stihl saws. Stuart.

One thing. The aftermarket top cover is open where the original has a shutter for cold/hot weather. If you are cutting during hot then tape it off (many are checking their covers after reading this). Mike
ssm1699
S

Will definitely look at that when I finally get it. Not 100% for sure when I will be here. The tank not being here, is definitely holding me up now.

I’ve about assembled the Farmertec MS460 kit. I think maybe it’s done actually. These caps sure are hard to close as of yet. I’ve got the fuel tank one closed once but I had to really HeMan it closed, really, I thought the flippy part was gonna come off. I re opened it and now the oil tank and fuel tank sit half closed for now just so no dust gets in there.

Few years ago I did put a new 460 OEM tank/handle with a new cap of course on my 046 and it was not like this, all OEM stuff of course though.

Im considering getting OEM caps if they have them in stock when I pick up some parts for my 046, provided it’s not $100 extra dollars either for just the caps . I finally just found a good Stihl dealer one town over that actually stocks stuff and doesn’t sell just homeowner trash and trimmer string like my Rocky’s/Ace hardware “Stihl Dealer”.

Anyone have this experience with Famertec caps? Anyone know if OEM flippy caps on a Farmertec tank/handle and case will solve the issue?

Honestly have no idea on the AM flippy caps. Not sure if my AM tank will have the cap or not. My oil tank cap is an OEM, so it obviously works fine. Been contemplating getting an oem cap for the fuel side, if the new tank doesn't have one.

TheAMMIXman said:
Anyone else’s Farmertec flippy caps really difficult to close?
. . .
Anyone have this experience with Famertec caps? Anyone know if OEM flippy caps on a Farmertec tank/handle and case will solve the issue?
Bruce
Click to expand...

Yes. The last time I tried to put a Farmertec flippy cap on a saw, I could not get it to go all the way on. I tried until I was afraid of breaking the cap and quit. A while back I bought online a lot of 50 O-rings of the exact dimensions given in the Stihl IPL. I removed the Farmertec O-ring (which looked a little thicker than the ones I bought) and replaced it with one of the ones I had bought. The cap turned with what felt like the right amount of resistance and didn't leak. The ring, not the cap was the problem.
TheAMMIXman

TheTone said:
A while back I bought online a lot of 50 O-rings of the exact dimensions given in the Stihl IPL.

The ring, not the cap was the problem.
Click to expand...

Thank you very much. I will likely do the same then.

So here they are. Almost ready, almost. Waiting on some AV parts for the ole girl, and I gotta find the upper air baffle that goes above the plug as well as the blockoff for in the filter cover(i read not supplied with famrertec plastics) for the new trick.

Now dubbed “the ole girl” and “the new trick”. Might even have the wife make some vinal decals with the names so I can put em right on them somewhere, small, not big like the Uncle Roots ones I made. I know the Uncle Roots ones say Uncle Roots “saw mods” but I only mod saws for myself, Uncle Roots is just a stump grinding thing as of now. They are both mildly ported so I figure they can be considered “modded”, free advertising, bragging rights, cool factor, +.1hp per sticker lol, ect, ect.

Please no one castrate me for putting a Stihl badge on the Farmertec ones recoil cover. Well you can if you want to, I can take it. I couldn’t help myself though. I had one here and the brass rivets for it too. I just thought it would looks so good to have two almost identical looking saws one brand new and one 25 years old. I certainly wasn’t going to install the 440 badge that came with the 460 kit, if the one supplied said what it really was I might have used it and not put a Stihl badge on a Farmertec.

Whichever one pulls it better in the end will get the 36” bar and bigger dogs once the Farmertec is broken in. The other one will rock a 20” or 28”. The Stihl has a few hours on it and has pulled the 36” with a skip tooth and a 7 pin just fine for my needs(occasionally cutting a stump low before I grind it). Hope everyone enjoys the pictures, that was the main purpose of the post, I just explain too much hence the overly long overly descriptive description.

I can almost guarantee that I will need the baffle that goes over the spark plug and the winter/summer shutter, as well.

A very small update for mine though, I did finally check the squish of my 460 build, after putting the p & c on. Have .021-.022" squish, without a base gasket. The sucker pulls hard from compression, with the decomp port plugged and a spark plug in. Interested to see what my compression is before breaking it in or even starting it for the first time. It is very definitely compression, when it pulls freely with nothing for a spark plug or decomp plug in. I bet it will be one hell of a runner. Really looking foward to getting my fuel tank and plastics here.

Well, just did a comp test on my 460 build. It is blowing 180+ with no break in. This is without even having it fully assembled, since I am still waiting on my fuel tank assembly. I would like to think it will be one heck of a runner, with those numbers. Have no idea what my timing numbers are, as I have no degree wheel.

Here is a question I have, as a preemptive to my saw being fully assembled and running. What does everyone prefer to run for a b&c length on their 046/ms460? I have bars upto a 32" that will fit on it. But I figure that the 32 would be for the ms660 clone that I have. I don't have a 28", but have a 25 and a 20. Just debating on which to run on it mostly. Just looking for input.

I’m no pro wood cutter or saw user that much is for sure, but I bet most would tell you to run only as big a bar as you need. I’ve hear you can loose from a tenth to as much as a half a horsepower per foot of bar, either way it makes sense there’s some loss there.

If your going to have a 660 and your not going to purchase any more bars at this time I’d stick with keeping the 32 on that one unless you won’t use it much and put wichever one you’ll use more or whichever one will store better with it on there on the 460. Ultimately it doesn’t take much to change around bars and chains, not that we want to do it needlessly, it does take time.

As I probably mentioned somewhere in this thread I’ve been running a 36” on my 046 with a skip chain but only for the sole purpose of cutting high stumps low to save me some grind time.

I used to just take the 046/36” and a 18” POS Poulan for small stuff and I guess the 36” is extra sometimes but I don’t wanna have to string that one up on the job if I don’t have to so it’s stayin on something.

I have many many more chains for the 28 and two bars too so that may dictate my decision for now. If it always feels excessive I’ll get more chains for the 20. If the 28” picks up a lot of the stuff the 36” use to feel a bit to big for it’ll probably wear keep wearing the 28”.

I guess that where I’m at on it. For now. Same decision to make for likely very different reasons of utilization.

Sorry for rambling, but it’s all there, I think.

Brought to you by the Department of Redundancy Department.
ssm1699
S

So, finally got my tank and plastics today. Opened them up and the plastics are for a 440. Very evident that they are. Already have a new set up of parts coming. Bought within the US, this time.

Sorry to here that guy. Wrong parts is always a bummer. I got mine going. Gotta cut some wood and break it in. Think videos are to big to post here but I took a few short ones of it running.