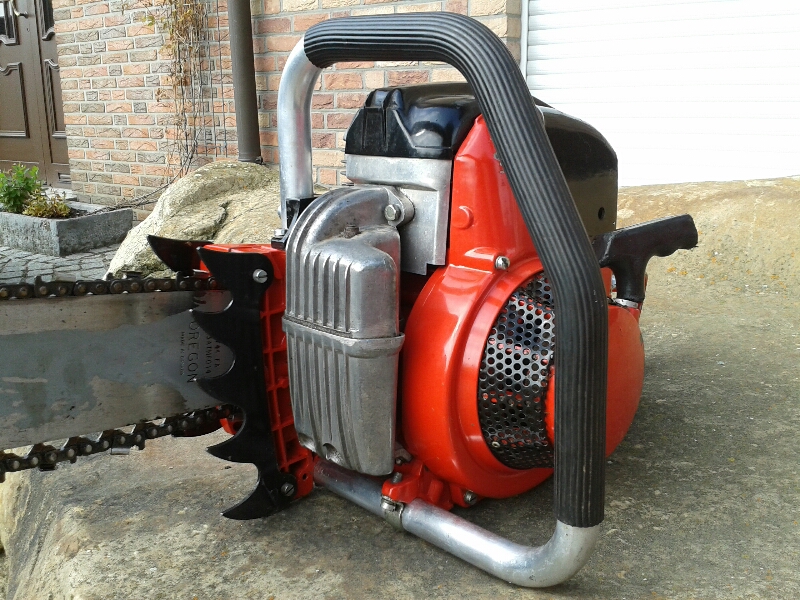 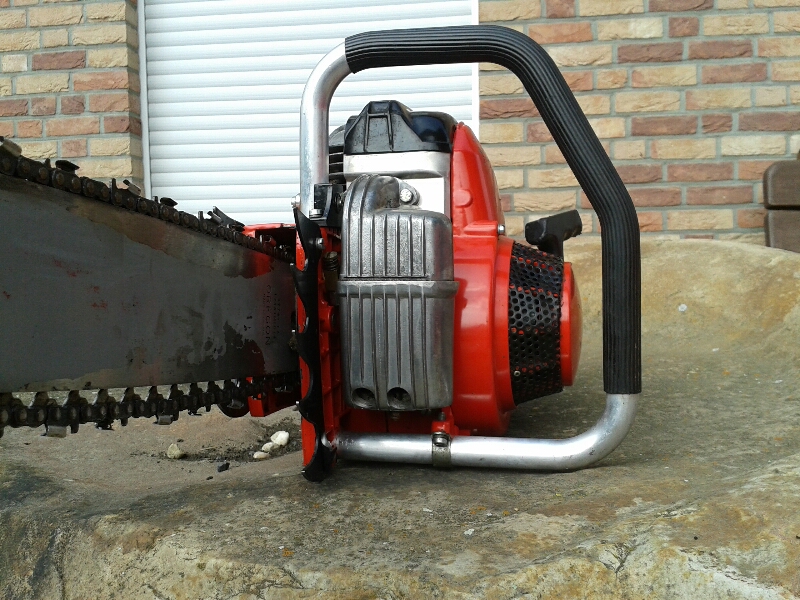 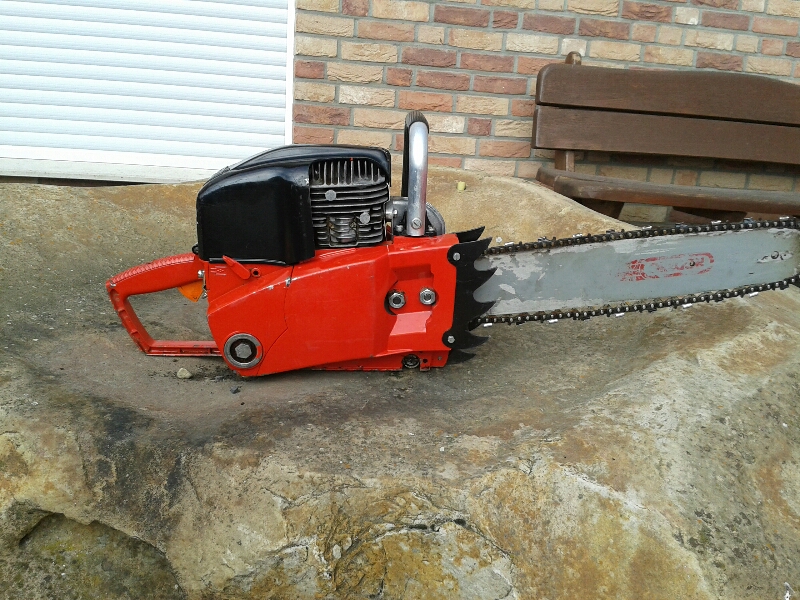 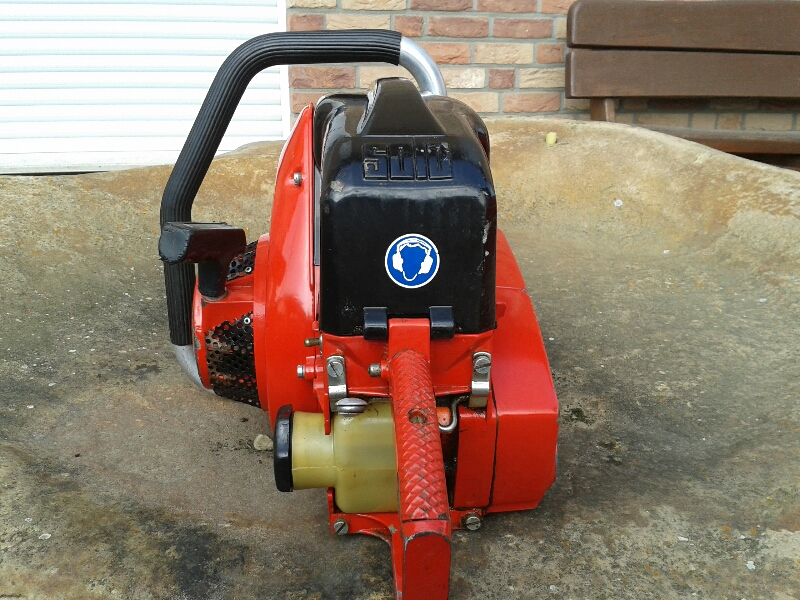 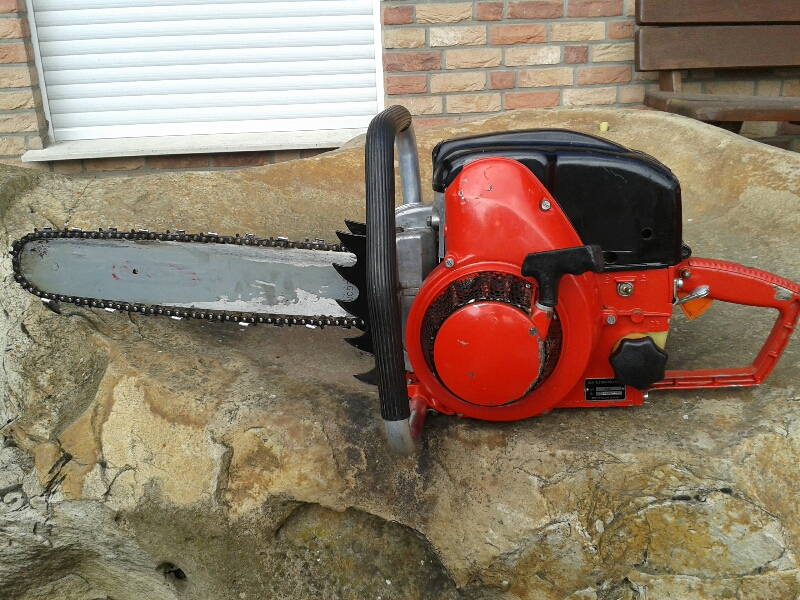 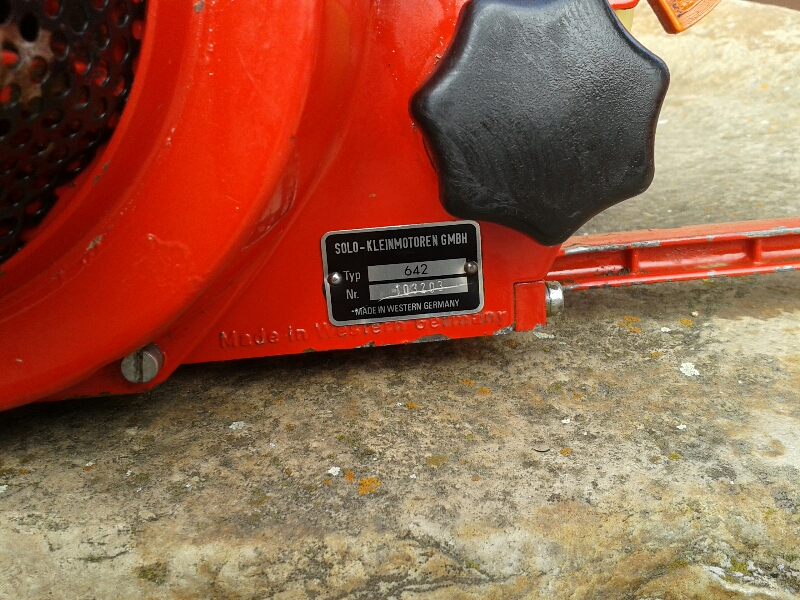 She runs great with lovely sound, butch the clutch spring is worn

But in near future I will get a new one

Hello folks! Ordered today a Solo 681 - dunno yet is she made in Germany or Austria, mid 2014 -> Solo saws will be produced by AL-KO factory in Austria. I hope to get one of those last ones from Sindelfingen, Germany. Guess you´re aware that AL-KO bought Solo´s "Garten + Forst" -businesses (Garden + Forest). http://www.solo-germany.com/ + http://www.al-ko.com/de/solobyalko/solo-ist-jetzt-solo-by-al-ko/
Beo

Good to hear you bought one of these excellent machines!

I promise that you will love her 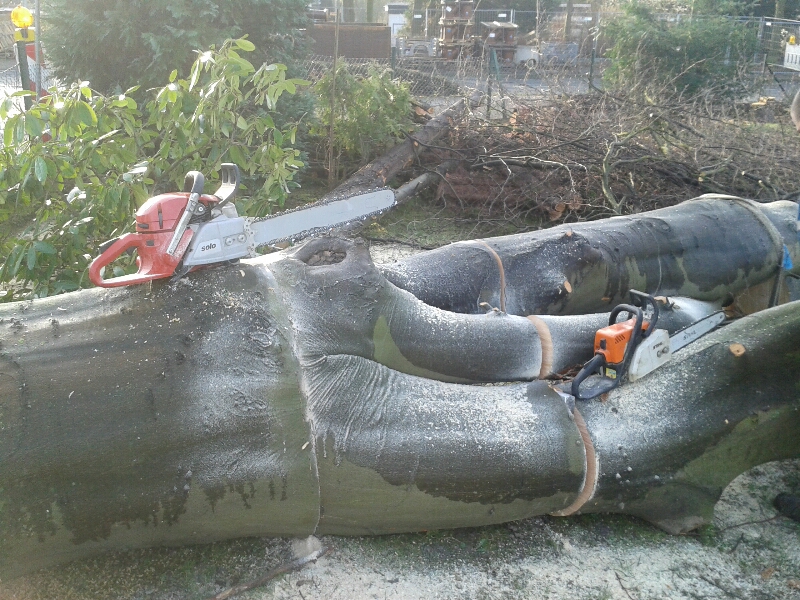 Please do not forget pictures when you got her

There was a very nice looking 650 fore sale on Kijiji in Ontario recently only wanted $100.00. I'm well served at that displacement or I would have bitten.

I noticed that some of the Solo boxes had text "Made in Germany" and other had´nt. I ordered mine from a small engine workshop, who sells Echo and Solo.

leecopland: There is so much interesting stuff for sale on Kijiji!
Beo

Kijiji.....have never heard of in germany and must have had a Wikipedia look to learn what you mean.
It's a web swap market

In germany it has an other name and I found nice saws there.

Can upload some pictures of them when wanted.

Juhana,
I don't know the quality differences from the new built Solos made on Austria or germany but I am nearly sure that they still were all built in Sindelfingen germany.

Most of the german forum user prefer the Dolmar 7900 or the later versions because the first big Solos have had some quality problems.
The mine not. She still works and screams like the first day

Big problem is the missing and rare Solo dealers near my place.
Sellers are enough but service is nothing

Yes you are right. In your link they just sell the smaller ones. Why not the big fun makers?

Beo: Few shops / markets in Finland sell Solo and even fewer professional models. I see two reasons for that, 1) Importer in Finland was changed 2012, and 2) marketing has always been very limited.

I´m still glad that some big box stores have taken Solo saws for sale. You can indeed get all Solo models from here - from small engine -specialized shops that sell Solo. Teräosa is importer for Solo from 2012 -> http://www.teraosa.fi/, I ordered from mr. Jääskeläinen - http://www.jaaskelainen.fi/konekipina/

We don´t have Kijiji here, I´ve just sometimes searched for parts etc. and very often got results from Kijiji.

What i´ve understood, Solo saws from mid-year 2014 will be produced in Austria:

Yes, it seems so that since this year the machines were built in Austria.

There was an topic in german forum but I hadn´t followed it further. Because my most interest are the vintage saws.
But I believe that Solo will hold its quality. The mine is a very strong runner and she is my best working saw.

She will stay for ever I hope

here we have www.ebay-kleinanzeigen.de here and it is full with vintage saws

So, here my next Solos 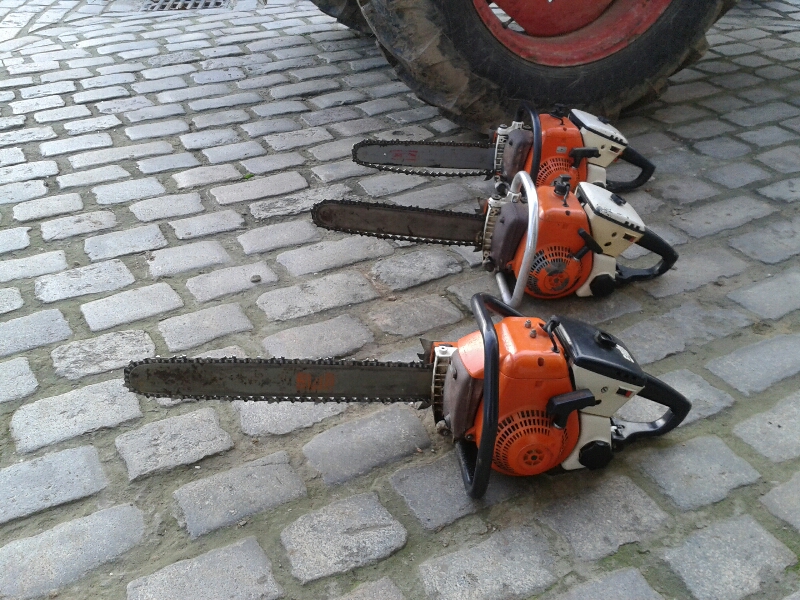 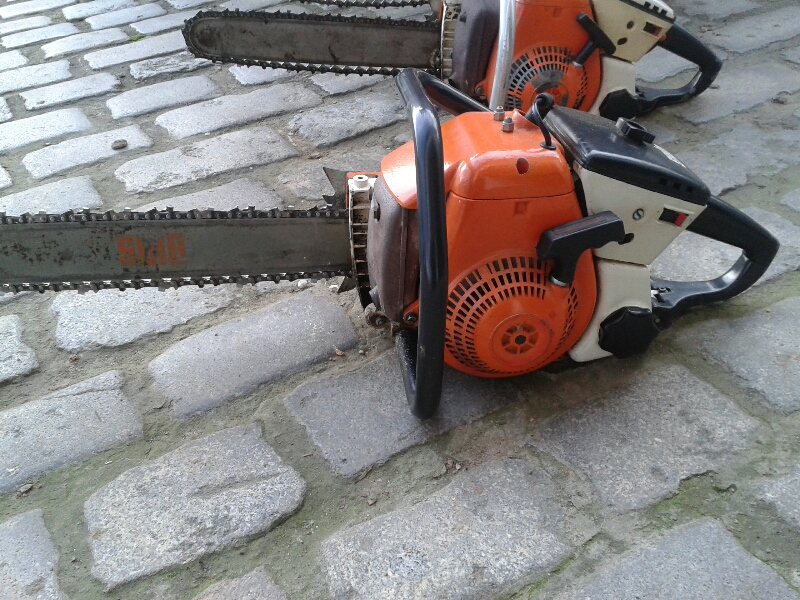 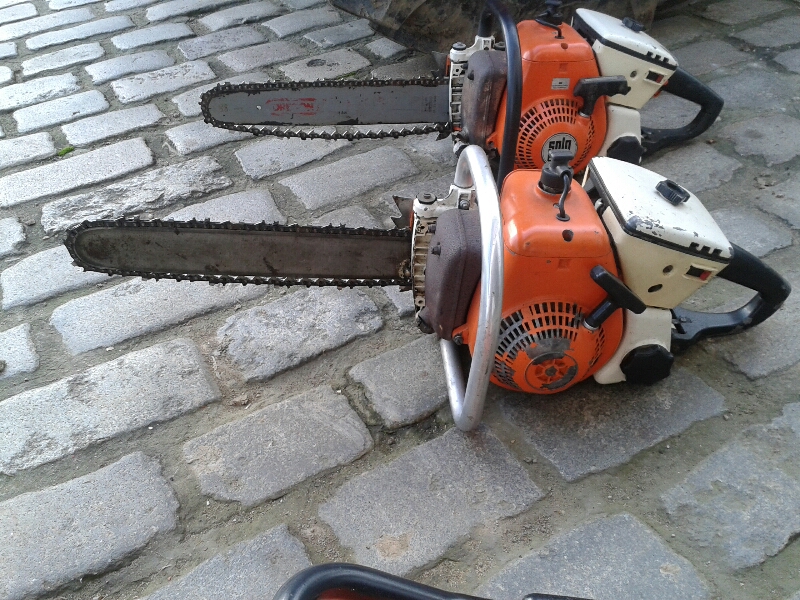 And here my smallest Solo. A 620 VA. She has ignition problems and is a non runner this moment. 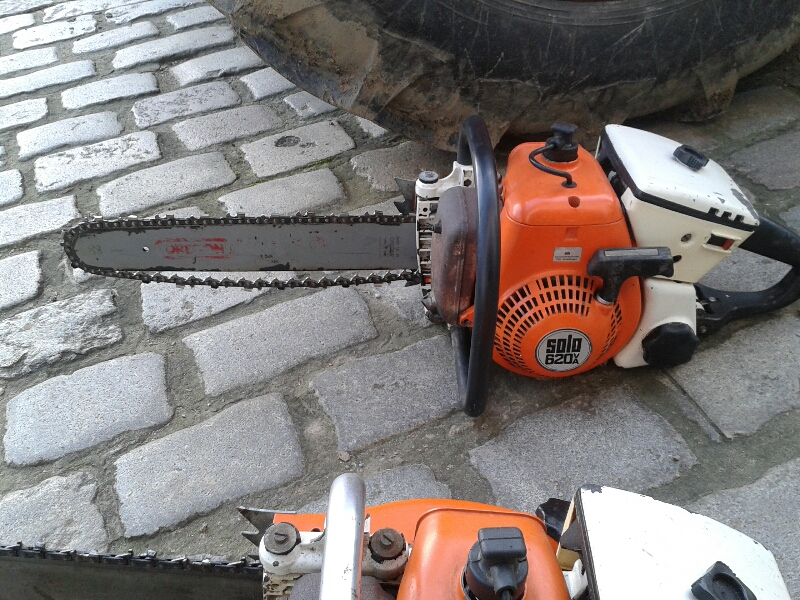 And here a look on the frontside of them. The 660 has a different front handle. This handle is sometimes to see on later small models. 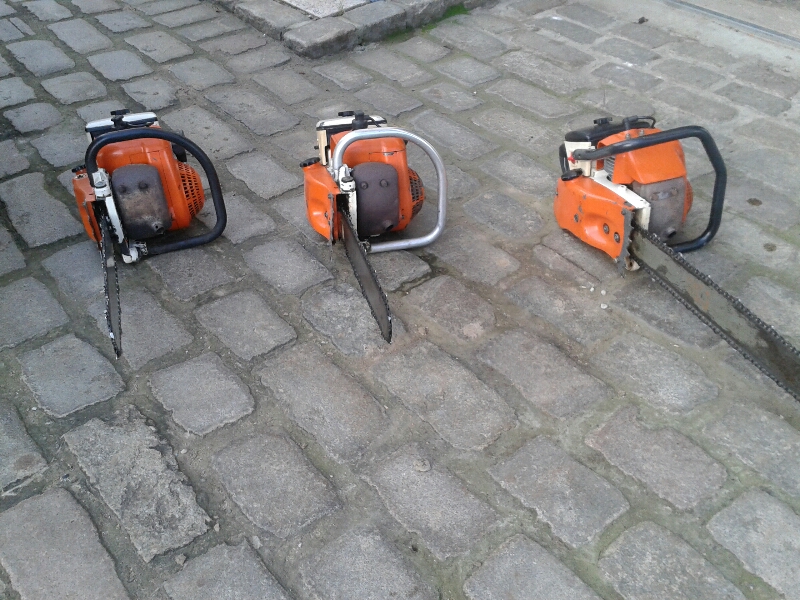 All have the same muffler.
Very early versions of this series have had cast alloy muffler. I search these models 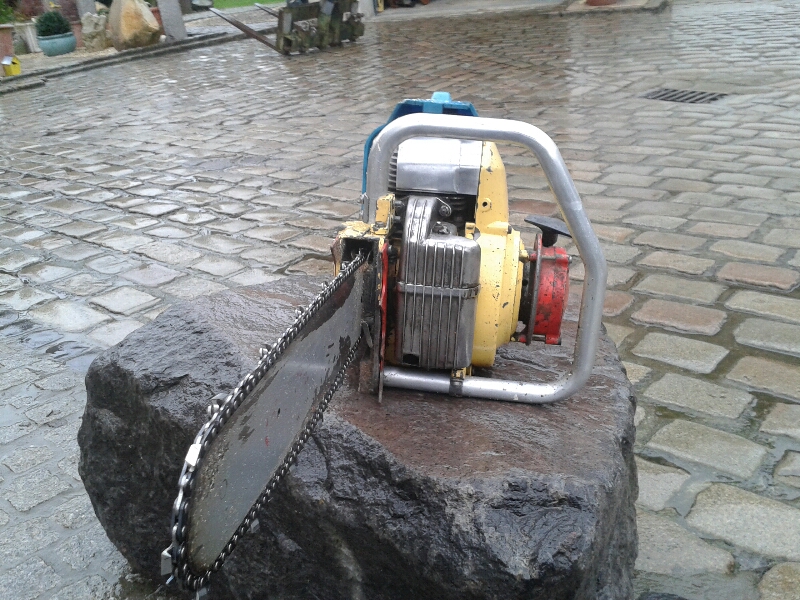 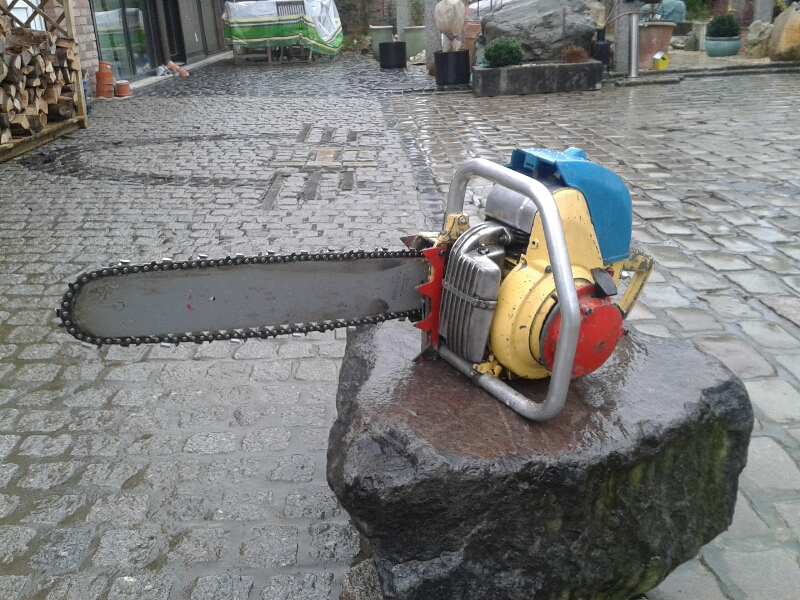 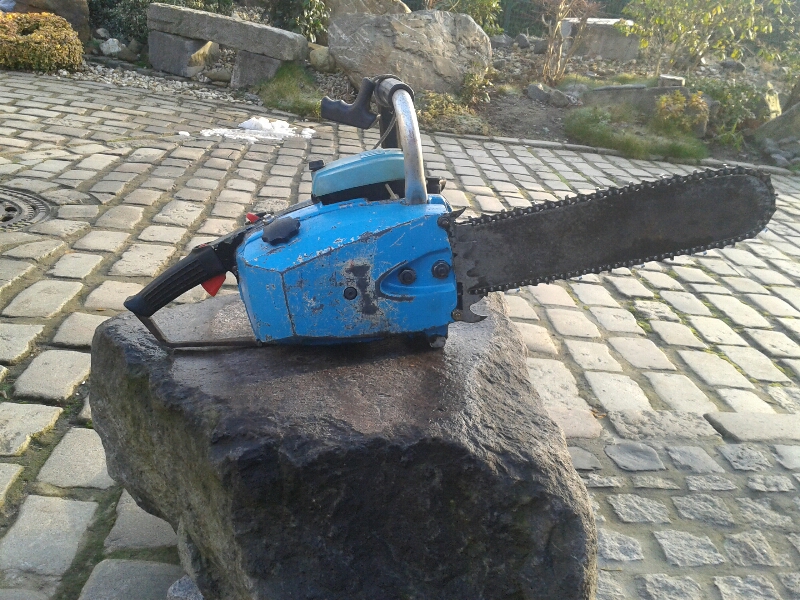 ozflea said:
Yeah the 290/340 Homelites and the 647/654 were prone to shaking their carbs loose the 2 bolts holding on the manifold would keep coming loose I repaired a lot of them
Click to expand...

The manifold bolts are very hard to get at, unless I'm doing something wrong. I've managed to acquire two more 54 (340) since last post.

I have a couple of Solo saws.

ozflea said:
Yeah the 290/340 Homelites and the 647/654 were prone to shaking their carbs loose the 2 bolts holding on the manifold would keep coming loose I repaired a lot of them
Click to expand...

Wow what is the secrete to getting at those manifold nuts? Looks like you have to revove the rear handle almost.
leeha

Just putting this out there. I'm looking for a piston for a 660VA if anyone
knows where i can find one i would be very grateful.

This will not be easy to find a piston. On german ebay sometimes complete 660s go about 100 Euro. Just engine parts are very rare.

Does no other 52mm piston fit with light modifications?

The problem in buying a partsaw is missing typeplates. Identifying is just possible with cylinder bore.

Hope you find your parts!
Beo

She runs great with lovely sound, butch the clutch spring is worn

But in near future I will get a new one

Now this is a beauty. Solo Twins are easier to find here than 642s. (Not necessarily cheaper, though)

Solo sure loved their colors. How many different shades of blue on the Rexes, then they use yellow, red, orange, black, white.... The 642s I've seen pictured were all white and orange.