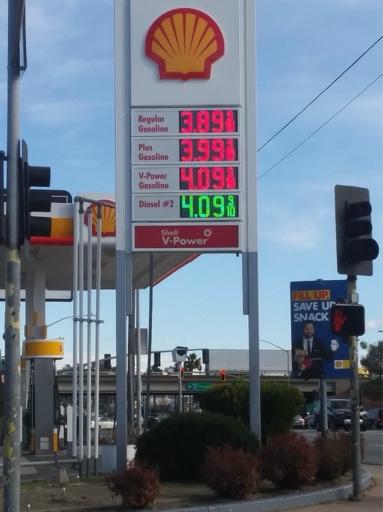 This was taken yesterday here in Redding, Ca


Sent from my iPhone using Tapatalk Pro
Click to expand...

I'm shocked that your grades are still only $0.10 apart. That ended here over 10 years ago. Our Regular and Premium are 70-80 cents apart.
bigbadbob

This was taken yesterday here in Redding, Ca


Sent from my iPhone using Tapatalk Pro
Click to expand...

LOl
You can add about .50 cents a gallon fer canadain.
You got it good.
Jan-Sietze

LogSawyer74 said:
Great for oil and gas industry right? I'm sure if you asked the major players in that industry, they are thrilled with the jump in price. Much more profitable, making it a much more sustainable long term industry. I'm always amused by people that are against alternative forms of energy, but are also not happy about rise in gas/oil prices. Can't have it both ways... I'm not a big fan of alternative energy either btw, just an observation
Click to expand...

At this time it is supply and demand. Texas refineries were off line or reduced processing with freeze week. Not designed for that. Now renewal and maintenance of anything damaged may have held them offline. Some of the required peripheral equipment may have sustained damage.
Thinking "cooling towers" , family biz designed and made them. Freeze may have caused damage that prevents correct function. Without the cooling on the condensation side of the crude oil "still",products aren't getting back to whichever liquid has gone to steam from the heat applied at the bottom.
esshup

That brings up a question that I have about Europe. If you live in the country, and I'm assuming that you don't' have access to public transportation, if someone works away from home how many miles per day do people average driving? When I worked at the mfg company, I had a 38 mile one way daily commute. My weekly average was around 1125 kilometers if I didn't go visit friends that lived 90 miles away.
yooper And there lies the problem !!!!!
GrizG

GeeVee said:
The Roundabout is not designed to eliminate accidents, its to reduce the severity of accidents when they happen. This roundabout was most likely a (the most efficient, practical, expedient and provide the highest level of service) countermeasure to the number of accidents that were serious and significant in terms of injury and death. But- I'm not a Professional Traffic Operation Engineer, I just employ hundreds of them.
Click to expand...

When NYSDOT presented plans for another roundabout it too was clearly intended to move motor vehicles. However, it also bisected the neighborhood by providing no viable pedestrian facilities and no bicyclist facilities at all. It was completely non- ADA compliant. The plan was the result of an "intersection at a time" mindset that ignored surrounding transportation infrastructure and the needs of pedestrians and cyclists (who thinks it's a good idea to force bicyclists to ride between lanes of traffic to enter a roundabout?). This happened as it was a state project, not a municipal project. I got the DOT's attention by referring to the design as a "meat grinder" and then articulating in detail what I saw as issues with the design. I followed up by providing information on Dutch designs for similar urban conditions. They went away for nearly three years and came back with a much different design... one that all traffic--motor vehicles, pedestrians, bicyclists--can live with, albeit the price went up about $6 million. At that, that intersection should still not have a roundabout as its going to send a steady stream of vehicles into nearby signalized intersections... Intersections that are part of a $12 million dollar Complete Streets Project. Traffic will back up into the roundabout and create gridlock at least 3 times per day as a result of the platoons forming at the signalized intersections.

BTW, I don't believe there was a single death at the traffic circle that was replaced by the roundabout during the 50 years or so that it existed. There were some bad crashes. There have also been injury accidents at the roundabout including several that involved motorists hitting the bluestone walls in the center and edges of the circle. "Fender benders" are a near daily occurrence... When you see an 8-10 acre facility that has 80-100+ signs on posts and myriad directional arrows painted on the pavement instructing people how to navigate it you've got a bad design. They kept adding signs and paint the first few years trying to cut the collision volume... It hasn't worked. Add in the fact that cops filling out accident reports don't know how to use it speaks volumes.

BTW, I'm not particularly enamored with how Complete Streets are executed in the U.S. We've got a lot to learn from the Dutch and their conscious decision in the 70s to stop prioritizing motor vehicles in urban and suburban areas. A summary of the Dutch experience, while not completely accurate in the opening paragraph's characterization, can be found at https://www.theguardian.com/cities/...e-capital-world-transport-cycling-kindermoord

My local area has seen an explosion of pedestrian and bicyclist traffic in recent years. We haven't got our biggest infrastructure projects on line yet... 6-24 months to completion on those. One facility that opened about 16 months ago has exceeded utilization projections by over double.

Amusingly, while I was writing this I got an e-mail from the chief engineer saying an idea I floated last evening in an e-mail is a great idea... If operationalized it will be a low cost high impact project that can be integrated with one in planning now. You transportation guys need some new new lenses when you view your projects. I'd suggest moving beyond Complete Streets and look towards the best practices of the Netherlands where non-conflicting transportation corridors exist for motorists, bicyclists and pedestrians.
yooper Gotta' be fake. Where was the camera if this shot was real?
woodchuckcanuck

Gotta be tough to live in the frozen north
stihlaficionado Gotta be tough to live in the frozen north
Click to expand...

What do you think will happen with wet clothes hung out to dry there?
kevin j
K

Hoowasat said:
What do you think will happen with wet clothes hung out to dry there?
Click to expand...