I have a Tanaka split boom with multiple attachments. It’s good for what it is, but at 25cc it doesn’t have enough grunt to hang in sometimes. I basically am forced to either waste time or run it like I hate it 100% of the time and it doesn’t keep up. Around here the pros all use stihl 4 mix, but I’m curious what else is out there that can hang in. I’ve worked on one and I’m not a huge fan.
Conquistador3

If I remember correctly in the US you cannot buy backpack brushcutters, ruling out a ton of good stuff and what most people run here for serious use.

Personally I really really like Honda four stroke. They may not make as much power as Stihl but the only way to kill them is to run them without oil. Easy to work on to boot and you can still get genuine spares for those made in the 90's. They now have a 50cc brushcutter engine out but I have no idea if there's a brushcutter using it yet.
Shindaiwa are great, make plenty of power but the old ones have lots of idiosyncrasies. They do rev like maniacs and can run a widia circular saw no problem though. No idea about the new ones because here they cost more than Stihl so nobody is buying them.
CacaoBoy
C

Agreed. I have the Honda model HHT355UKA. Reliable, good power, a little quieter than a 2 stroke, and goes a long time on its small tank of gas.

CacaoBoy said:
Agreed. I have the Honda model HHT355UKA. Reliable, good power, a little quieter than a 2 stroke, and goes a long time on its small tank of gas.
Click to expand...

I don’t mind the Honda, Husqvarna makes a model with the Honda engine but it’s heavy, and it’s a mid grade at best, not pro. I like the two strokes because of the weight difference and the ease of repair.
full chizel

I have the Shindaiwa T262 and like it a lot. Its the red version of the Echo 2620. Echo also make a T version that doesn’t spin as fast but has more torque.
Haironyourchest

I have a Shindaiwa T282. I love it! It's bit heavy for running through a yard for weekly trimming, but I do it. It's great for all around use. I use it to trim fence lines a few times a year. It will destroy vegetation on our dam that I trim a couple times a year. It always has the power to make quick work of things. I've ran a blade on it a few times to cut briars and saplings. I got it almost 10 years ago now from a local shop. At the time he was moving to mostly Echo, and the owner took $100 off of it. Had to get it.
CR888
C

40+cc's with a Mahle cylinder & your half way there.
John Lyngdal
J

I run a FS250 with a fine tooth carbide blade, it's a terror on vine maple.
1" in diameter it hardly knows it's there, 2" in diameter you have to work at it a bit.
alderman

I have had good luck with Shindaiwa over the years. Spend many hours cutting brush.
I would recommend at least 30cc for rubbing a blade. May not need that much power with a fresh sharp blade but as it dulls it will become a necessity to get anything done.
I’ve opted to purchase used equipment saving a lot of money over the cost of new.
I’ve had this old C35 for 36 years and it still runs well. 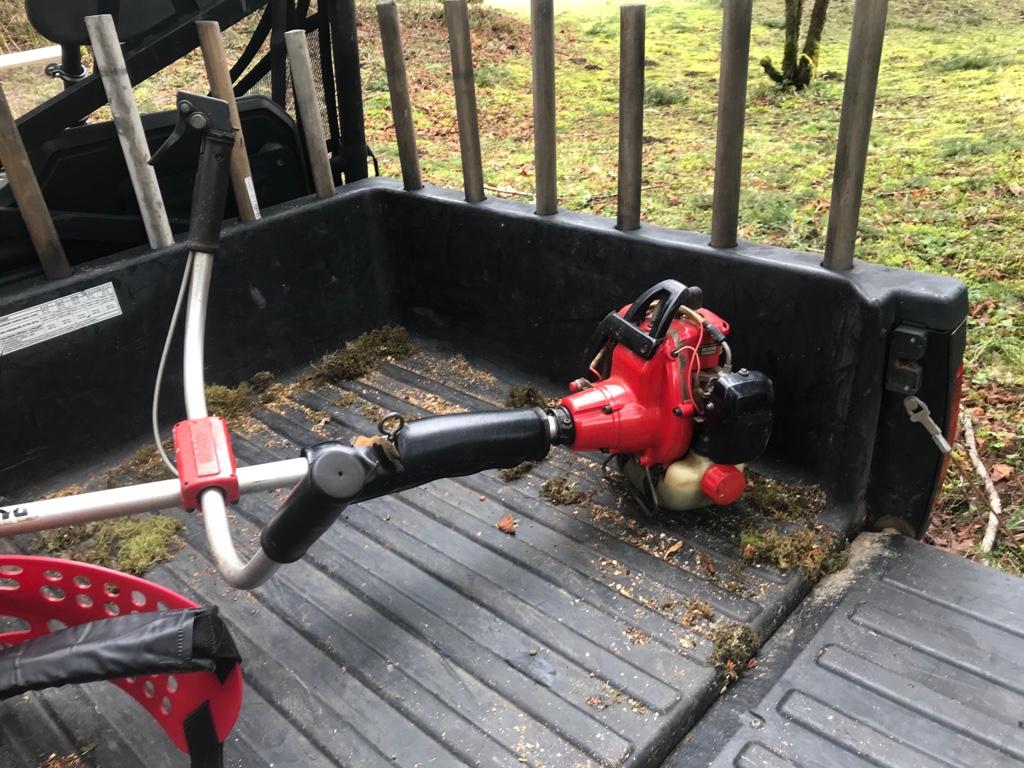 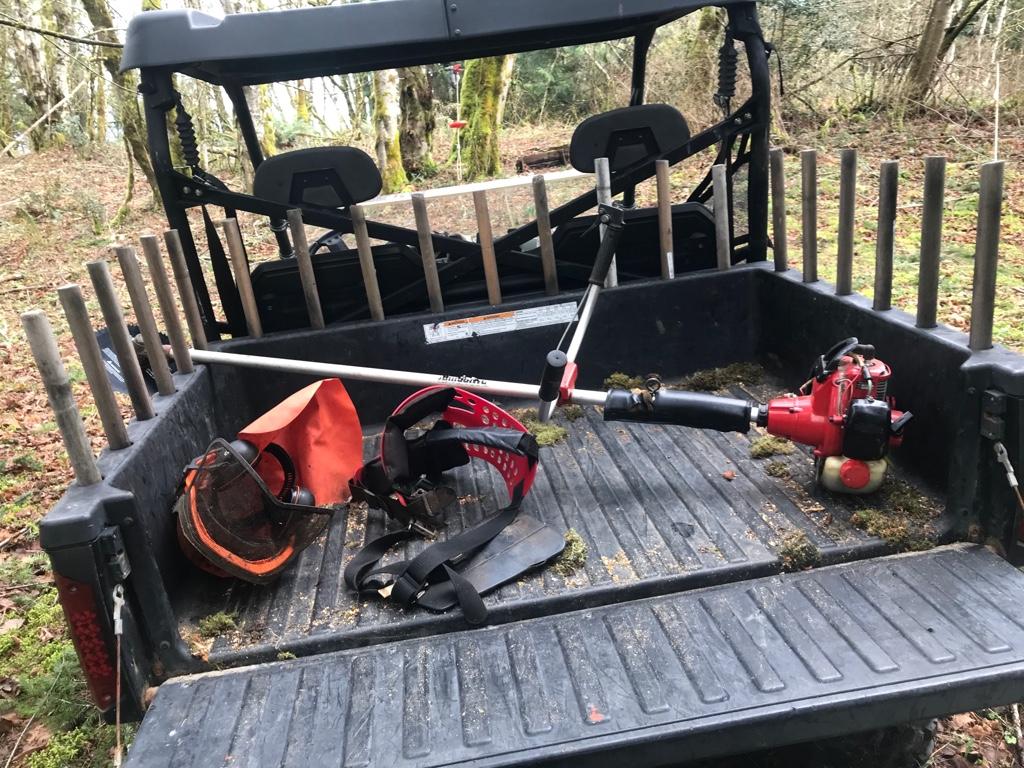 Back in the day the cat’s ass for heavy work that didn’t really require a big clearing saw was a Stihl FS 250. Spooled up really fast, 40 cc, lots of power. Really too much for the Stihl guard, it kept the line too short. Shindaiwa was another thing, but the dealer network wasn’t as good and I never saw as many. The lawn guys ran Echo’s smaller trimmers and they work great for them. Stihl’s FS 85 was the go to for lawn guys who ran Stihl. Mind, the Stihl stuff cost a lot more than the competition.

The FS 250 is NLA, and the FS 130 became the go to for that type of work. It was less zippy but still worked awesome. I haven’t bought a new one in a long time, but I think it’s been superseded by an FS 131. It’s probably a good machine. A lot of people worry about 4 Mix engines, but it seems like the landscape guys and farmers get great life out of them. I haven’t done anything with a trimmer other than the house in a long time.
sawfun

I have an fs250r and an fs94r and much prefer the 94 for around the house string usage. The 250 gets the nod on blackberries with a shredder blade. That's about it's best use.
Brazos
B

I have a 20 year old echo sum-2100 that still runs and does well. I found the need for a bigger trimmer so I bought an echo arm-410U (found on-line for $420). It came set up with a brush cutter blade but I bought a trimmer head for it. I researched quite a bit and this seemed like the biggest, heavy duty option. My new place has a decent sized sloped area I can’t use a mower on so I wanted as big a weed eater as I could get. I was about to buy a $650 Sthil but found a deal on the 410U. I got it all together and have been using it the past couple weeks and it will flat cut grass. It’s a bicycle handle type trimmer so you will need a harness. I have a Husqvarna harness that came with my Husqvarna 555fx brush cutter (the 410U came with a harness but it’s junk). Nice thing about the echo 410U is I have a second heavy duty brush cutter if needed. I like the 410U as it has a long shaft like a weeadeater but is heavy duty like a brushcutter. My 555fx has a short shaft and I consider it a dedicated brush cutter though I could put a trimmer head on it. Not sure what your needs are but this set up seems to fit the bill for what I needed.
Training Wheels

Sometimes nothing can beat a real cool hand

sawfun said:
I have an fs250r and an fs94r and much prefer the 94 for around the house string usage. The 250 gets the nod on blackberries with a shredder blade. That's about it's best use.
Click to expand...

I'd second the 94 it's light and plenty powerful for weekly accounts and EOW....I also have a FS85 which weighs the same but has a little more power. They're(fs85's) pretty cheap to pick up these days and bombproof. For the serious stuff, I do use the 4-mix FS130 it's a torque monster.

Stihl FS 250r best one ever made, light and powerful 40.2 cc
sawfun

I have a fs250r and found it best in certain applications. It's too much as a trimmer around my house and too little for deforesting as I've done both with mine. I found mine was best with a shredder blade against blackberries, where it is absolutely incredible. I do hate the vibes it has with any blade though. Around my house the fs94r is much better in every way.
Cris2727
C

I use the fs250r with huge mustard and tumbleweed, works great
Cris2727
C

I have three
chilipeppermaniac
C