Why is the bark falling off my Maple tree?

We have a maple tree we planted 4 years ago. It has been doing really well and growing very nicely. This spring/summer though I noticed that bark was starting to pull away. Yesterday I found that it has gotten just awful. The tree looks healthy overall but won't this loss of bark kill it soon? What could have caused this? It seems to have developed a 'split' in the side in the last year or two but would that cause the bark problem? 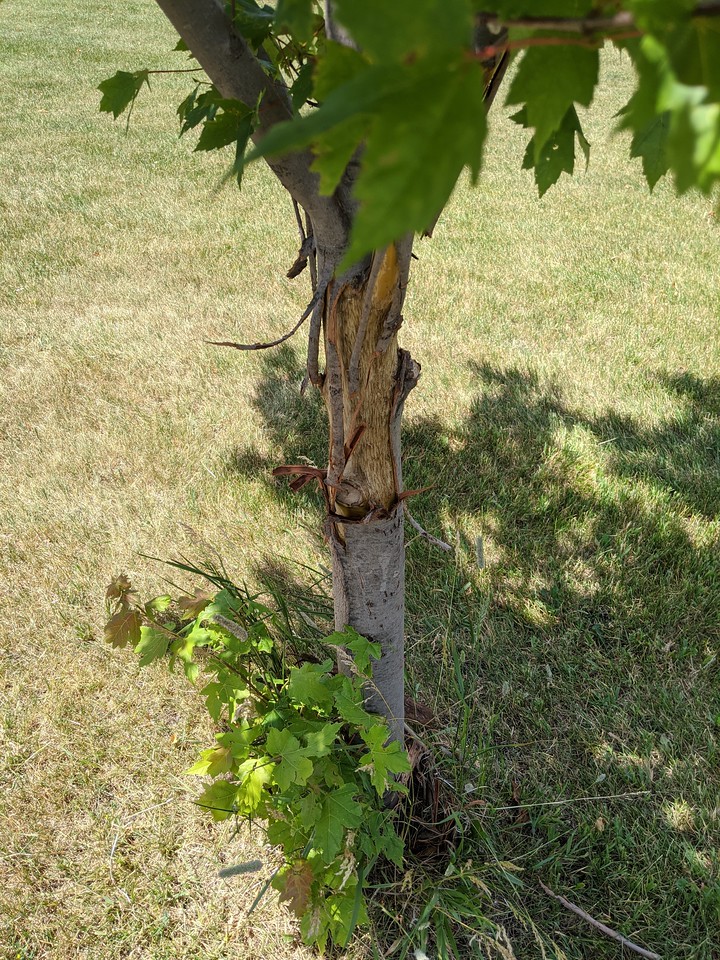 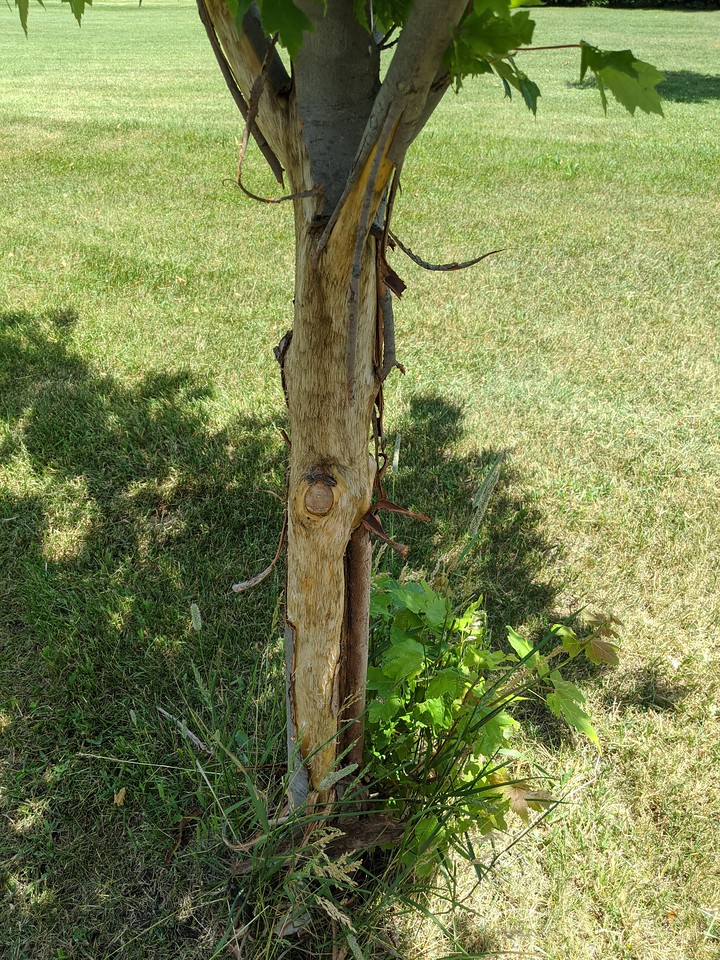 Wow, I'm amazed it still has leaves. My only thought is it was planted too deep and may have developed some girdling roots.. Can you trim some of the growth around the base so we can see the root flair? A mulch ring is preferable to all the grass underneath as well. There is also what looks like a nasty wound that is trying to close. Any idea what happened there?
noodlewalker

I don't want to sound silly, but I don't see a cage around it.... Is it possible that deer are eating it? It looks to me like it is being peeled or rubbed..... Just what came to my mind right off the bat.
farmer steve

noodlewalker said:
I don't want to sound silly, but I don't see a cage around it.... Is it possible that deer are eating it? It looks to me like it is being peeled or rubbed..... Just what came to my mind right off the bat.
Click to expand...

That was my thought too. Looks like a buck rub
buzz sawyer

Hadn't even considered that. If so, that tree won't last long.
BigBlue

We don't tend to have deer near the property. I don't think it looks like rub marks. No other trees show signs and there are 3 or 4 more right in the area about the same size. It actually started with just a couple pieces peeling away a couple weeks ago and just got worse. I'll trim stuff up and take better pics of the bottom, but I'm not sure what roots will be visible?

The tree has been here 4 years and is planted in nice, soft black dirt. I don't know what causes girdling but it seems weird that this just all of a sudden started.

I don't know what happened with that 'wound'. That seemed to start small too and just get bigger in the last year. It's never been hit with a mower or anything else.

The bark looks like it just peeling off up the tree and getting brittle, by the way.
buzz sawyer

Root damage usually takes a couple years to show up. Carefully remove the grass at the base and look for the root flare. Here's a video on girdling roots. http://www.missouribotanicalgarden....ests-and-problems/environmental/girdling.aspx

Could also be something associated with the wound. I did a short google search for bark peeling off tree but found nothing that looks like yours.
If you want to try something that won't hurt, remove the grass from around the base out to about 12" and add a couple inches of mulch, but keep it away from the trunk.
buzz sawyer

Any chance the wound faces South? Could be sunscald, When were the lower branches removed?
LogSawyer74

In Oklahoma, sunscald on maple trees is pretty common. I’ve got 2, bark on both look bad on the south side. My wife’s uncle (landscaper) says there is a commercial wrap available to help with sunscald
BigBlue

The three lower limbs were removed early spring this year. I think that wound was there already, but obviously not the bark problem. The wound is on the south side. The bark is off all around the tree.

As far as planting, I plated this myself. I'm pretty careful when planting to keep the tree in the ground at the same level it was in the pot it came in. I do loosen the dirt under and around the hole. We have nice soft black dirt so it shouldn't be hard for the roots to spread.

I removed the grass from an area 12" out from the trunk. I didn't dig down too deep but I tried to brush away dirt to expose a few roots. These pics show what it looks like. I've added mulch around it now 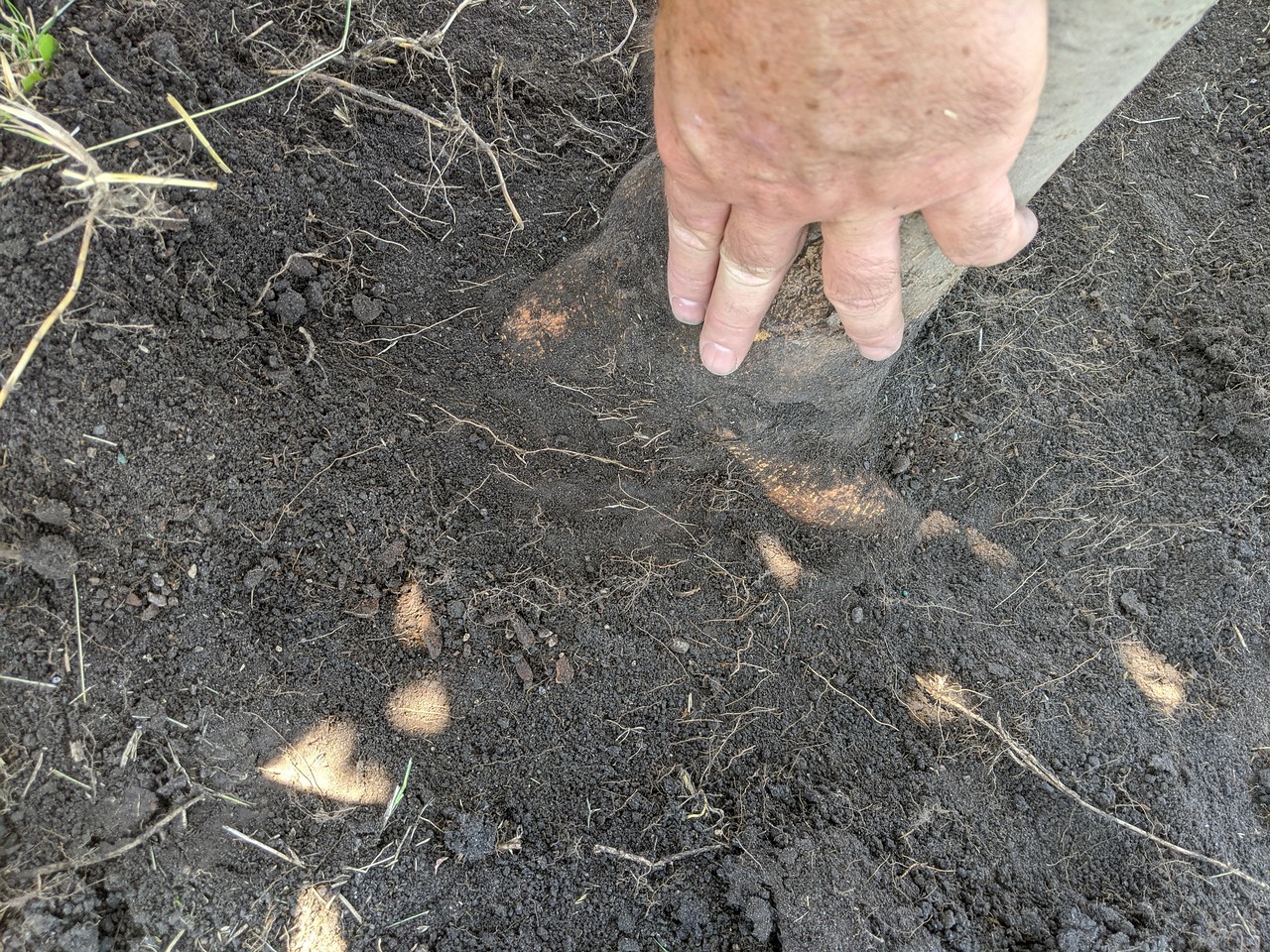 Thanks,
Rob
Big Weed
B

That trunk has been shredded. Deer.
BigBlue

Big Weed said:
That trunk has been shredded. Deer.
Click to expand...

An update on the tree. Despite having the bark removed all the way around in at least a section the tree is still looking very happy and healthy (well, except for the trunk). I thought removal of all bark around the tree in a spot (girdling) was a death sentence. Maybe it still will be over winter or next spring, but at present it looks like it isn't deadly.

Your tree is toast and yes that's deer damage. If the bark was blown off and scattered around its possible that it was hit by lightning. Either way it's toast.
BigBlue

So how long is it going to live happily before it dies? What is the event that pushes it over the edge?
jimrb
J

The bucks may finish killing it this year. I see bark like this in the Georgia woods all the time. Those antlers are itchy in the summer. Or maybe not. https://www.fws.gov/midwest/news/8PointsOnAntlers.html
Woody912

Raintree said:
Your tree is toast and yes that's deer damage. If the bark was blown off and scattered around its possible that it was hit by lightning. Either way it's toast.
Click to expand...

agree on toast, disagree on deer. I would be thinking about replacement
capetrees

It's not deer yet at this time of the year. The velvet is still on the antlers and super sensitive. The velvet dries around the end of august.

How long has the bark been cracked or dried off the trunk?
BigBlue

It's very unlikely to be deer. There are no signs of gouging or scratching in the wood.

The tree has been like this since around the time I first posted about it. Two weeks before that it was mostly fine, other than the 'wound'. And the bark hasn't peeled away much more than it was at the time I took pictures.