Hi all.....I'm just getting started into chainsaw milling.....and I love it.

What's everyone thoughts and tips for using a Stihl 076 Super for chainsaw milling?

I milled about 50 logs with an 076.
This was the first log I milled with it, a short Liquid Amber 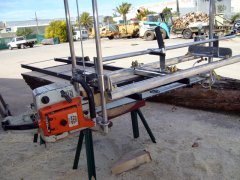 Pros:
loads of grunt
exhaust located away from log side - this means the exhaust gas doesn't bounce off the log and up into operators face 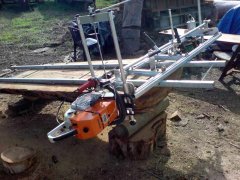 I think there a great saw, however you do raise great points,

Did you use an aux oiler or was the saws output enough?

Here's some pic of my first slabs with the 076.

Great saw for milling. What you need is a tractor and not a hot rod. Is newer better? Sure. But in the day 051/076 were the logger saws.

Could not agree more with Bob L's points. It is a powerhouse, but you will need frequent re-fueling, and the fuel cap location will necessitate taking the saw out each time should you run out mid cut. That will make you pull your hair out!

I think there a great saw, however you do raise great points,

Did you use an aux oiler or was the saws output enough?

Yes I used an aux oiler as oil output is only about 20 mL/min (the 880 is about double that). I even use an aux oiler on the 880.
This is the oil tank made by by BIL from a piece of 4" Al tubing.
The oiler tap is now connected via a cable to a bicycle gear lever located near the operator so it could be switched on/off and adjusted at the operators position. 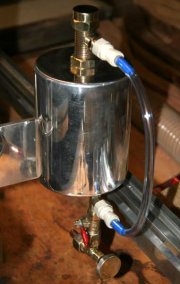 Running a 42" bar with standard chain, it seems a bit slow in the cut, should I be using ripping chain.

I have attached a pic of my saw with most recent slab.

RE: Maintenance
I found I hade to service the clutch drum needle bearing more often than I though would be needed. They need to be removed and cleaned and re-
greased about every dozen logs or so.
Knock out air filter every 3-4 hours.
Keep bar groove and b&C oil path clear of oily sawdust.

RE: Slow cutting
The first thing I would look at are rakers,
Do you know about progressive raker depth settings?
Post s close up side on picture of one of your cutters and I will give you a diagnosis.
Like this if you can' 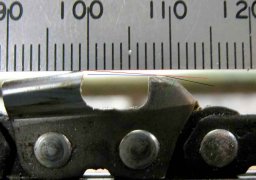 Could you explain what you mean by clutch drum bearing and how to remove and clean,

OK the first thing I'm seeing is a lack of consistency between these 3 cutters,

- cutter 1) looks like it has more hook than 2 and 3.
- the raker on 1) and 2) look lower than 3) which is definitely too high
It looks like you have taken some of raker 2 (its more triangular) but nothing of rakers 3 and 4 (not labelled)
The rakers actually dig a little bit into the wood which along with cutter hook determines how much depth the cutter can bite. Its pointless have rakers that re too high and razor sharp cutters, This just makes loads of fine dust.

There also looks like there is gaps under the ruler at 2) this means that cutter is shorter than teh others.
First thing I would do is get the cutters all looking a bit more alike.

RE: Progressive raker setting
Try this https://www.arboristsite.com/threads/cs-milling-101-hints-tips-and-tricks.93458/page-8#post-5712979
There's link there to the Hot saws "chain sharpening forum" - where the top sticky (Are FOP really progressive depth raker generators?) is all on progressive chain sharpening and was started by yours truly 13 years ago.

The bottom line is the rakers depts needs to change as the chain wears. The 0.025" raker gauges are basically a waste of time after the first couple of sharpens because by then the rakers should be 0,03". Anyway those links will hopefully explain but get back to me if you are unsure.

Would the rakers be wrong after 2 sharpens?
H

Would the rakers be wrong after 2 sharpens?
Click to expand...

Some of us go ahead and take the depth gauges down a hair on a brand new chain. I do it if I have time. For most larger saws, stock chain is a little lackluster. Even on smaller saws I still prefer an aggressive chain.


Two to three sharpenings at the beginning would warrant a lick or three off the depths. Just dont go crazy with it. Light, short strokes are better than a long stroke with lots of pressure applied.

Would the rakers be wrong after 2 sharpens?
Click to expand...

The first thing i do with stock chain is drop the rakers. The KPI for rakers are the angle between the raker/cutter tip/wood (or on the picture above, the ruler. I call this the "raker angle".

2 sharpenings might not seem much but it depends on how much metal you removed. For low dust cutting a minimum raker depth should be 1/10 (corresponds to about of them gullet width but with a big saw like an 076 in Aussie hardwoods, 1/9 is a better ratio to work with and if teh logs are narrow I swap from a 7 pin drive sproket to an 9 pin,

If all this maths is not your bag just use the method my dad used. Drop your rakers by taking 3 swipe of each raker and try a full bar length cut. If it goes OK, swipe 3 more times of each raker and try again. and keep doing this until the the chain starts to grab and it might even stall the saw, This means you have gone too far so now take a few swipes off each cutter to get you back to optimum, Measure the raker depth with feeler gauges and that is your sweet spot BUT only for that power head that specific cutter length, that chain.bar length, in that wood etc.

Better still, measure the gullet width and raker depth and work out the ratio and that will be the ratio for ANY cutter length but once again, only for that power head, that chain.bar length, in that wood etc.

Confusing as heck.??? but cuts like a hot knife thru butter all through the life of the chain.

Thanks, heaps for that....the maths is well above my head so will probably have to to with filing them and trying it...then adjust as needed.

Going to try do some more milling this weekend...ill let you know how I go.

I used one for a little bit. It like to rattle the carb bolts loose but was a low rpm grunter. Did this 40” wide cut with ease. My new 3120 blows it out of the water tho 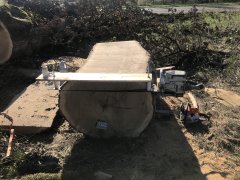 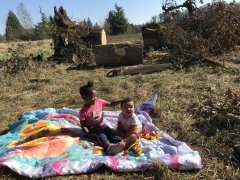 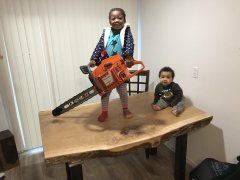 I now understand the pros and cons of using an 076

I love the power of this saw however parts are hard to find.

I have recently broken my sprocket and now need to replace this.....can anyone tell me how to pull the clutch off and then replace the sprocket?

Aussie076 said:
I now understand the pros and cons of using an 076

I love the power of this saw however parts are hard to find.

I have recently broken my sprocket and now need to replace this.....can anyone tell me how to pull the clutch off and then replace the sprocket?
Click to expand...

What do you mean by "broke the sprocket"?

You really need to get the maintenance and repair manual, I have a paper version (and am not scanning 72 pages) but go to the beg for manuals thread and see if you can get a PDF version.

One thing you will need is a left handed torque wrench to put the clutch not back on properly.

The drive sprocket broke in half.....not sure why tho......i was just running as normal.

I have a look through the pdf

Thanks bob, do you know where I can buy one of those wrench's?