You guys are my best peeps so I know I can count on you.... I may just need to vent about this.

My 16 year old dump trailer has a single acting 12v pump. and the ground wire from the motor to the solenoid maybe wasn't the thickest grade of wire to begin with, and I had replaced it about ten years ago with a same size wire as the original, which I replaced because it had gotten hot enough to melt the rubber insulation way back then. When I replaced it, about six inch length, the stud coming out of the motor was rusty and questionable, but I was able to remove the nut and put it back on. Other work I have done? I replaced the metal tank with a new one about ten years ago, because it had rusted out. and eight years ago, I put a new solenoid on it with a generic Chevy solenoid ($12.00) . That was easy, since the ground wire on the motor stud didn't need to come off. In 2011 I cut the rusted bed sides off the tray, about three inches, and set it aside, then cut the tray (bed frame) off and built a new one out of 2x3, using the old as a pattern. The new bed skin got welded down, and because I narrowed the length and width by 1/4 inch, the old sides were set down and welded to the side of the dump bed. Continuous welded the bed floor to the sides, and I eliminated the moisture trap that rusted out the frame tubing. Last year, I cut the sides off and set it aside and removed the bed skin- both were rusted out enough now to replace them both (but I didn't have to build a new dump frame this time), and after cleaning up the dump frame. The bed skin basically rusted through from the top down, with big scaling rust, and the sides were just the same. big pocks of scaling section loss. BUT. the rebuild I had done in 11 really paid off doing it the way I had. when I see dump trailers today, they are simply rusting the frame because the way the manufacturers are assembling them. When I put the new bed down and built new sides this time, I used the same technique, but the wife and I spent alot of time with degreaser and Ospho/Prep and Etch, getting it ready for paint, including thin prime coats of Rustoleum (black) and two final coats of yellow over a two week period - under cover in the pole barn. The original Chassis is unmolested C- channel that while it has rust, its just a different grade of steel, and is solid. it got wire brushed, and really worked on, since we had access to it with no bed skin or sides. I did replace both axles leaf springs and shackles and the equalizers this past spring as well.

I live on the beach and BOUY ( Big Old Ugly Yellow Trailer) has spent much of his life here instead of at the ranch 25 minutes away, but technically only 4 miles west of the river and ocean. Rust never sleeps. As well as we prepped the new steel, (TSP, stiff boat brushes, pressure washer, and Ospho) we still have some places that the Rustoleum didn't bond to, and of course using the trailer mostly to haul my skid steer, the bed needs a fresh coat. I thinking the mill scale or preservative the factory puts on it didn't get cleaned off well enough. but now, a year later, I think with a grinder, and or belt sander or DA, I can get the metal clean, and the coat of paint will bond without question.

Last evening, was the last straw. The insulation on this ground wire is gone, and the wire was glowing red. I had a load of soil I was trying to dump, and it was straining, but working. The deep cycle battery had 11.7 in it, but I wound up putting my charger booster on ( the battery) it to finish the dump cycle- me thinking the ground of the battery and the generator would help the situation.

I'm not hopeful I could find a electric motor shop that would tear down the motor and replace the stud, frankly. And its WAY beyond my ability. 12 v automotive electric is my Krytponite, I'm powerless. I believe I will just order a new pump/tank and install it- but what chaps my ass is my Dad would be telling me it works, and someone could fix the ground stud. He's been dead for 12 years, but he'd be right- I can't stand throwing it out, so it will go on a shelf or bench I guess.

Have any of you opened up one of these things? Is it feasible to think I could remove the motor and maybe put a sheave or lovejoy coupling on it and have a gas powered hydro pump? Or maybe put a sheave or driveshaft on it and use my Ag Tractor PTO to run it? When I replaced the tank, I didn't have to mess with the motor side of the pump. I think I may have even left it mounted in the frame and slid the old tank off and on. My buddy wasn't sure if the pump is built for gas or PTO, since it is instant torque with an electric motor.

I think I am resigned to buying a replacement pump/motor/tank unit complete for my trailer anyway since the throw away society has consumed everything, but am anxious to hear what you men and women think?
ChoppyChoppy

Anything under 12.8v is less than fully charged.
GeeVee

Deep cycle battery, is 11.7 really dead ChoppyDuece? I mean, I'll surely charge it back up. But I though that was the reason for Deep cycle batteries. I know very little about 12v electric. It did work, but the grounding stud is not going to be serviceable.
J D

GeeVee said:
Deep cycle battery, is 11.7 really dead ChoppyDuece? I mean, I'll surely charge it back up. But I though that was the reason for Deep cycle batteries. I know very little about 12v electric. It did work, but the grounding stud is not going to be serviceable.
Click to expand...

Pictures please.
There may be other ways to ground the pump.
Was it 11.7V under load (ie when operating)? If a 12V lead acid battery measures less than 12.8V unloaded (once given an hour or so to stabilize) it needs charging. Your deep cycle battery will recover better when heavily discharged due to its construction & thicker plates. Over discharging any lead acid battery will shorten it's life, the more it is discharged & the longer it stays that way the worse the sulfation is.
Having a flatter battery will mean the pump works less efficiently & actually draws more current. If your wiring is underrated for said current it will get hot & brake down causing further issues
kevin j
K

What do you mean by ground stud? Most of the 12v power units have a positive stud on the solenoid, but their ground is through the motor housing and frame.
Pictures would help
cantoo

I likely have half a dozen used but working 12 volt pumps sitting in my barn. They are for back up when a new one is not readily available. If the pump on my truck or trailers screw up I just replace the whole thing with a new one. If it screws up on a job I can quickly lose more than the price of a new pump so it's worth it for me. I try to mount my pumps where they stay like new. The first picture is the one in my dump truck. It's behind the passenger seat and is covered by 1/8" thick white plastic and looks like the day I put it in about 10 years ago. The rest of the pics are complete pumps I have laying around. One is a portable pump with outlets that I use for raising equipment to move it with my truck or whatever.

Pics will have to wait, its at my daughters house and I wont get there for two days. Its the pump motor negative stud, and i think it goes to one side of the solenoid. On another forum, a guy mentioned if the stud was loose, it can be arcing, and drawing alot of current. These other men also said a good starter rebuilder can handle it without much effort, so even though my guy retired, he recommended a shop 40 minutes away
GeeVee 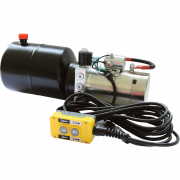 OK mine looks similar, the stud on the right hand side? that's the one and the length of battery cable that's fried. I should take it off and send it to a starter rebuilder guy right?
kevin j
K

Now it makes more sense.Yes a starter guy should be able to repair it. That’s not the ground stud though that’s the positive cable from the solenoid into the motor. It will have a frame ground using the case for the negative side.
J D

Any competent auto electric person should be able to sort it (or advise if it's unviable to repair). Some mechanic's would be capable too. If the threads on the end of the stud are damaged (fairly common) you can replace the nuts with thinner ones (or grind them thinner) so you can get the terminal to clamp again. Probably a good idea to check the brushes, & the contacts in the solenoid (if possible, otherwise check the voltage drop across it under load)
You must log in or register to reply here.