Any noob-level help? Have been carving for a while, but then they get soft&die...don't know what I don't know! (FL/9a)

I'm hoping for help on a few specific areas Re carvings:
- how to handle the wood's-condition at & right-after cut-time (if this matters? It is still wet/green here, though perhaps capillary action allows impregnation of some preservatives or something?)
- whether there's any ways to speed-up a "curing"/weathering of green wood, aside from just leaving it outdoors in the FL sun (ideally, off the dirt/ground, but even-then it seems to cure["lose its water-weight"/be dead] in a comparable time-frame to any pieces I have on shelves where they only get wet when it rains)
- what I can do to the woods I'm using, before/during&after the actual carving (of weathered/cured pieces) to increase longevity?

Thanks a ton for any & all insight, I know it's pretty broad but after >half decade of dabbling (mostly via bonsai, am hardly at 2yrs climbing/arborism-proper), have finally realized I "made it to another level" in that now I "know what I don't know", and I wanna get-on knowing ;D For context, I work with smaller stuff and am FAR more interested in talking "deadwood type materials" than thick sections of felled&bucked lumber, I know the latter would of course be more-common here but for me it's the opposite i'm still barely learning the myriad things I can do w/ job-waste (besides paying the dump to weigh&take it from me ) and will have the whole 'alaskan mill' setups in short order (unless I'm maimed in the interim or something!) but for now it's almost entirely the wood of tropical trees, large-sized bonsai mostly, for instance if I collect 5 large shrubs or trees (~6" minimum trunk-girth, the 6-->12" region being ideal and that's "breast diameter height" for a lego-man lol, am talking lowest-trunk-thickness without cheating and counting root-flare/buttressing) and I get home & pot them up, and 1 doesn't survive, I save its trunk -- it's gonna be a purty trunk or I wouldn't have collected for bonsai'ing it in the 1st place of course - and I've been using such pieces of wood (once they dry like 2/3rds+ of a year) to make stands ('single tree' stands, like 1-legged-tables) for bonsai specimen, the trees usually used for these are dried/weathered/cured: maple, bald cypress, ficus....here's a picture of an older one, the base is off of it but it's got a groove across its base so it can stand on a 1x1" "X" that is buried 1" in the dirt so it looks like it's just standing there due to the buttressing(root-flare, 'nebari' in bonsai-speak)

Some pieces of ficus' aerial-roots, just got these so won't be 'weathered'/cured/etc for a bit but liked that they were aerial roots / not trunking so was worth working with them to me!

SO....
I'm hoping for tips on how to make the strongest, longest-lasting stands from stuff like those guys ^, am actually re-doing that 1st pic (bc trunk w/ knee) as my next project but have plenty more comparably-awesome pieces to work with (most cured/weathered already, some larger than 1st pic and some smaller than 2nd pic but those types are more 'table-top stands'), I have any relevant tools at my disposal and think at-minimum I'll be:
- sanding & more-thoroughly "homogenizing" the wood-surface, wish I had a sand-blasting chamber (have tried flap disks on grinder, wire-wheels on strong drills, nothing lets me easily strip bark before it wants-off..)
- drilling pilot-holes for *any* penetrations, and using fiberglass-resin as my "loctite" (figure it'll both 'seal' everything so far as rust on screws, but also penetrate-into surrounding wood)
- after weathering, before 'working'/styling/using, I'm planning to burnish them, in their entirety, over a fire-pit Had been using lots of propane on the deadwood in my garden (naturally as I've got way over 100 trees) and once I began trying to use my smaller torches to burnish carving-woods I realized I needed open-flame (and burnishing is the only thing that'll keep wood good in my enviro, lime sulfur treatments are OK but so far as i've seen burnishing is requisite for longevity) Although, since these stands aren't deadwood-on-a-bonsai, I could use chemicals IE maybe there's oil-stains for preservation that you guys could recommend?(would wanna stay clear and zero gloss, I think)
- all mated-surfaces will be done with Permatex, to get real seals!!

Thanks for any&all tips, even links to sites or keywords or anything, I haven't "messed-around" with this stuff in like a year and have a lotta good material built-up and the tools to do anything I want, just still feel green about making something I'm confident will be solid in 3yrs time!!

Oh and fwiw, Re wood-carving, for ages I've been carving small-scale ie the actual 'real' deadwood(ie not drift/collected wood) on my bonsai, it's actually used extensively as a feature in bonsai artistry, so have been carving with grinders (from dremels to 1/4 die-grinder to my 4" chainsaw-disc for my angle-grinder - very fun piece of hardware, that one ) for a while but was only in past couple years I got good enough (& right accessories) to make sharp angles, use the oscillating tool to make any accurate grooving/notching/cut-outs.....so very small-scale, size-wise, figured that's worth mention as I've never let my real chainsaws near my garden (petrol bar oil, too risky!!) but, now that I'm making more stands (ie stuff that can get oil on it and it's no problem), I've been using my 10" and 15" saws (25 and 36cc top handles) where I used to struggle with a sawzall and am only beginning to "style"/touch the actual 'product' (more than its footing, I mean) using a 10" chainsaw as tool/paintbrush, can see the fun potential there but what are you guys using to hold-down your wood while you work it? Had tried just pegging it with large rocks/boulders but then you're working downward which just didn't work for me!

Again thanks for any&all info, really wanna approach all this great raw & seasoned material with far more knowledge than I've got now ;D

Well, you have a mass of questions, but it would also appear, a wealth of knowledge. I'm sure some form of trade could be arranged.
Let's start with the fun/funny stuff. If you're willing to carve with one of those 4" chainsaw discs you must have balls of steel.
My brother used one of those to carve this from a piece of plywood. 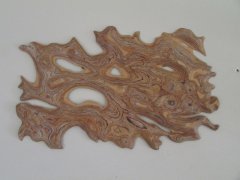 However, he had the angle grinder attached to the end of a metre long pole. I have tried to convince him to carve me a larger one, but he refuses to have anything to do with that tool now. I think he used it for this one too. 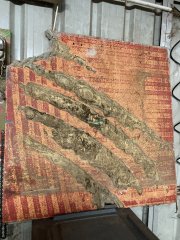 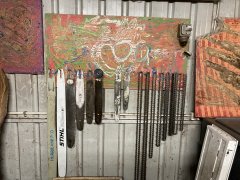 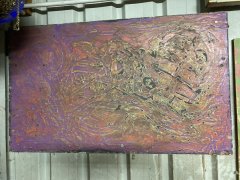 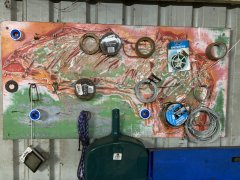 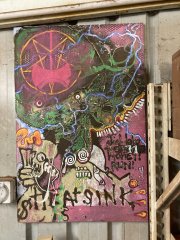 The others I just posted because I like them as pieces of art but they are also very useful.

If you are mainly working with ficus, I think that may be one of your issues. Ficus wood is pretty sh** timber and I would expect it to break down fairly quickly and lose it's structural integrity. 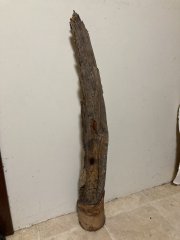 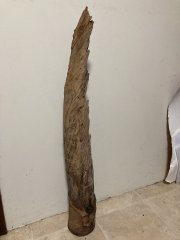 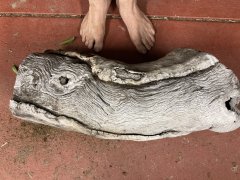 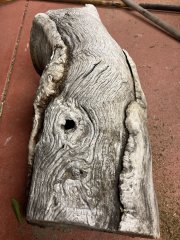 These other bits are eucalyptus that were probably dead in the tree for years before being cut out. While I doubt you have ready access to eucalypt, but the point that I think I am trying to make is that if you want to understand which timbers age well, go out looking for for trees with large sections of deadwood that appear to have been there for a significant period.

For your end of the deal, I would love to see your bonsai. You could post them here but their is a specific thread for bonsai in the pictures and videos section of the Tree Care forum.

B
Advice on what to do with tree near driveway

K
How do i know if its s good one?