saturday, inspired by the neighbors lettuce salad bar in garden, decided to put together one here, too. several seeds already popping only 2 days later! arugula not yet, though. 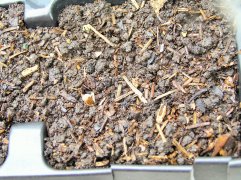 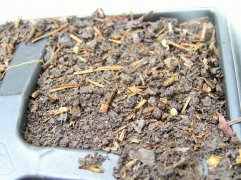 and that lil Better Boy tomato seed that took... well, he is doing quite well of late. flexing and showing off.... 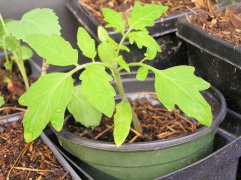 Backyard Lumberjack said:
and that lil Better Boy tomato seed that took... well, he is doing quite well of late. flexing and showing off....
View attachment 946744
Click to expand...

Can you grow year round down there?
Backyard Lumberjack

and not to be out done... his cohorts are kicking up a steady stream of work-in-progess quite unlike i have seen in days gone by! bit on amazing side, imo. think i have figured out why.... 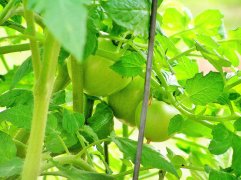 while sitting in my tree stand... i thot i would do another wipe clean on the M17's binoc lenses, eye-piece. not knowing much about it or such items history... did some look-sees over at Utube U... and was amazed and the info. historical, volumes, other nation's, and how-to's r/rs... and learned some about carrying cases, too. noticed the leather hand carrying strap was gone. so i plan on a leather project soon, starting with a pattern made from info garnished from the 'U"... 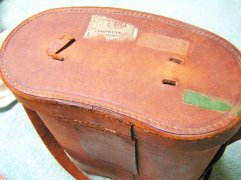 another project in the works is to catch up on some firewood splitting. had pulled the battery a few months back... and was a bit concerned it mite not charge up. a scrounged lil bat charger needing almost no work, sans some exposed wire tapping and clip cleaning... did the job 4 days. couple hrs first day, let it sit, bit longer, sit, then more time... and over the weekend, just when i had decided prob not going to amp up... low and behold a green light! so we shall see... if not, nbd... a new 280 cranking amps batt garden variety... $28.00-WM. 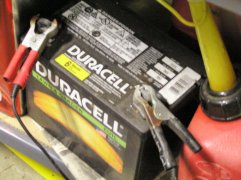 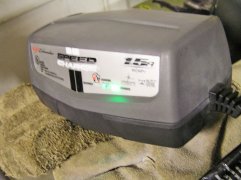 but that chipper seems to recover well...

come to think about it... make that: two!

Its Michigan, if you wait for the weather you may be waiting a while lol.

Not sure, just brought it down and in the house to warm up a bit. I use it all yr and store it outside, so I'm guessing it's not going to help. When I fired it up this morning, third pull, because I forgot to turn the choke on, remembered after the second pull.

Backyard Lumberjack said:
there you go chipper! 'and as for the roof, ... that's a wrap!'

things to do. list is long. i need to be too, long gone! i like a good blonde joke... one for the road 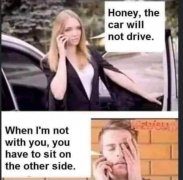 its Monday. felt like that to me all day long yesterday. hope yours is a good one

Brufab said:
I seen your from ECHOville hahaha that's my kind of town! Also that police blotter sucks, what the heck happened to this country everything going to hell.
Click to expand...

on the road to Echoville, Texas 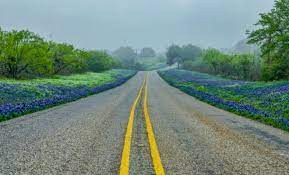 bit of a hole-in-the-wall town... but suits me ok 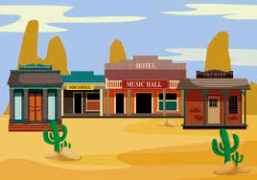 some of the l t locals affectionately refer to it as
sagebrush flats!

chipper1 said:
Its Michigan, if you wait for the weather you may be waiting a while lol.

Not sure, just brought it down and in the house to warm up a bit. I use it all yr and store it outside, so I'm guessing it's not going to help. When I fired it up this morning, third pull, because I forgot to turn the choke on, remembered after the second pull.

I would go with the seamless gutters, looks better and no joints to leak. Probly need 6" for the amount of water coming off that mega roof!
woodchuckcanuck

Backyard Lumberjack said:
kinda reminds of some of those big historical oaks they moved when the H Ranch was being built in the early days. huge oaks. huge root ball. dig down, secure all or most of roots... build large concrete circular wall... get the bottom, too. get it on huge timbers... and relocate! back when the HD trucks still were chain driven to rear wheels... amazing!
View attachment 946713
Click to expand...

Speakin' of chain drive trucks, probably the oldest pic I have in the collection.. A White Motor Company truck hauling fir logs. 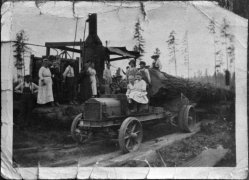 Good evening everyone.
Had a good day as far as getting something done and feeling better.
The barn is now covered on both sides to the ridge(minus the vent gap of 4"). Hopefully the steel will be going on sooner rather than later, seems like it's been a long time coming.
Had to run to town for more cap nails, I had burned thru a couple 100 piece boxes and a couple 190 piece boxes and ran and bought another 190 box and used about 3/4 of it.
When I went I decided to get fuel for the saws/backpack blower. While the truck was warming up I decided to look at the backpack blower and try to figure out what was wrong. The first thing I did was to look at the fuel, realized quickly that it was not quite the light orange that my mix normally is(maxima k2), but rather a bit more on the red side. Since I can't smell much or taste (not that I would have) I dipped my finger in the tank and instantly knew what I had done. Ends up this was the gas can I had put diesel in for the bonfire and not my large gas can for the saws that I keep in the truck. So I dumped all the diesel out of the blower into the bonfire pit and started a fire in there with some leftover stump pieces, then I put an inch or so of mix in the tank and used the purge bulb to move the mix thru the carb. I also shook the blower to help flush the diesel out of the inside of the tank. Then I gave it a pull without the choke on, and nothing, then I choked it and it popped a bit, then I gave it another pull and she fired right up, but it sure did smoke a lot lol.
I headed out to the store and when I got back I fired it up again and it smoked a bit then too, so I left it run long enough to get it nice and hot. It seems to be all good now, ready for another 20yrs after that diesel flush lol.
Hope you all had a productive day too.
Brufab

Guessing diesel is better than straight gassing it?
Backyard Lumberjack

they say, but i can't tell. guess no stars is a clue. boy! ~ things changed around here in a hurry once that front passed on by. temps fell faster than an icy skid of a tin roof job in winter! what was T-shirt weather for first cup of

was sweatshirt weather early afternoon. mid-70ish to mid 60's! in about a flash!~ 59f out to 55f or so. chilly for sure, but pleasant. stayed in my T. almost layered up. for bike ride did. to include over coat. 62f then. and nice. few wind gusts earlier as the front edged by us... 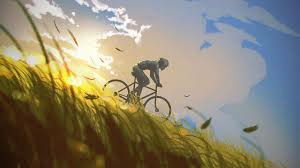 Yea windchills in single digits tonight and lows in the teens gonna be warmer maybe 50 by weekend here. Had wind gusts up to 50 mph today.
woodchuckcanuck

... might have a leak. The wife's been up most of the night. Her supersonic hypersonic hearing could pick up a water drip inside the walls. When I finally decided to drag my butt out of bed at 4:30am to see what's up, had to get dressed and go get a ladder and poke around up in the attic with a flashlight. No signs of water coming in but its a complicated roofing section, so it could be coming from anywhere. Paint blisters will be the telltale sign I guess.
Mornin' folks. 16ºC and rain is falling in burst now at a rate of 110mm/hr. 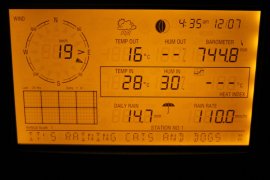 17F/-8C up to 25F/-4C with the occasional snowflake. Maybe burn one of the brush piles since there is snow on the ground. Always more cleanup in the pole barn to do. Make it a good one everybody. 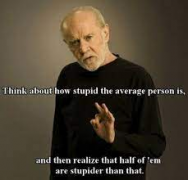 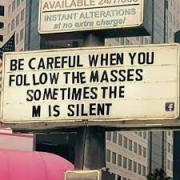 Good morning. 29*/clearer. Happy Cotton Candy day. Take a minute to remember Pearl Harbor today. Got the call from the State trooper that he is going to pick up some of my stolen saws today.

Guess they are short on space at the barracks because he said I need to pick them up as soon as he calls me . Almost an hour drive to the station for me. Vet appt. today for our 17 year old 3 legged cat Linus today. Have a great day guys. FS.
Buckshot00

Oldmaple said:
17F/-8C up to 25F/-4C with the occasional snowflake. Maybe burn one of the brush piles since there is snow on the ground. Always more cleanup in the pole barn to do. Make it a good one everybody.

My favorite saying on the left. Good morning. 54 and dropping. Wind as usual is whipping.
knockbill

Good morning everyone..
You must log in or register to reply here.