How do you decide what your "ride" is?

I feel ya. Did you get a tacoma? I see alot of import trucks have differential locking option on them.
ElevatorGuy

No Tacoma, I have a 4Runner and a Corolla.
Brufab

ElevatorGuy said:
After making the 3rd p.o.s. Mopar mistake I bought my first Toyota. I will never own anything again from that company, Everything they make is garbage. I will actually probably never buy another American vehicle.
Click to expand...

Actually Chrysler hasn’t been an American car company for a while. They were good prior to Daimler and ok during their ownership . Fiat has screwed Chrysler up . Not a fan of anything made by them
SS396driver

I have a first gen Tacoma . Still going strong at 18 years old . People ask if it’s for sale about as often as the 72 C20
ElevatorGuy

SS396driver said:
Actually Chrysler hasn’t been an American car company for a while. They were good prior to Daimler and ok during their ownership . Fiat has screwed Chrysler up . Not a fan of anything made by them
Click to expand...

I’m well aware of the trash company and the many owners that have tried to change them. Mopar was trash long before fiat ever got involved. They should’ve died in 08 ish. Their name and rep sucks so bad they changed the truck brand to a new name. Same junk, different name. They could rename dodge Toyota next time and it wouldn’t improve reliability.
FlyingDutchman
F

I worked for FCA for awhile, they make excellent trucks and have come a long long way. I'd be driving a RAM or a Charger/Challenger in a heartbeat if I could afford any of them. We had many die hard customers that were screwed over by every other brand a time or another. RAM is working hard to steal away commercial truck sales from Ford. The initial quality is better than Ford and the upfit ease for bodies is the best in the industry. I still get to see trucks I delivered with Knapehide bodies driving by my house every single day.

Even what people thought were horrible cars (2014 Chrysler 200) beyond some interior quirks that I don't like, my dad has put 150k on a 2014 200 and he gets around 40mpg with it and beyond one wheel bearing it hasn't needed any work besides regular maintenance. He never washes it, no rust. The 2016 Subaru I had had multiple issues, including the battery would go dead after a week of sitting, the paint was absolute trash and it was starting to rust with less than 50k, despite being washed and waxed constantly. The transmission was constantly messing up and even with AWD, the car was terrible in the snow and got stuck frequently. Dealership was absolutely horrible. The only thing I'm glad for is that they hold their resale so I could get rid of it.

After years of searching, got my dump truck finally. How sweet it is. 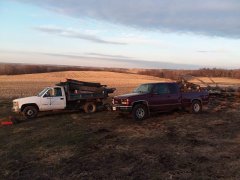 Location
In the sticks

I’ve had a passion for Jeeps since my dad bought me my first one 33 years ago. I’ve owned several since then. So when I was buying a new vehicle this spring it was an easy choice to get a new Wrangler. Of course it had to be a two door Wrangler as I don’t do 4 door jeeps lol. But I also still have my low mileage F250 quad cab 4x4 diesel for my work stuff.

My girlfriend has a 2016 Ram 1500 and it's a complete POS aside from the transmission. Constant bugs in the operating system and the exhaust leaks, OMG. If I upgrade her to wife, she'll be driving a Ford soon after.
ElevatorGuy

A reliable mopar trans?! You just haven’t waited long enough, it will self destruct. The other issues are typical mopar junk issues though

I was surprised at the ram 2500s when i was a commercial flat roofer. Maybe a 2008ish towed a 14' enclosed double axle trailer loaded to the max 6 days a week for 250k+ miles but that could of been the needle in the hay stack though. I find dodges interior quality to be poor at best. We got newer rams in 2013-14 and had some trans troubles with them.
Blue Oaks

ElevatorGuy said:
A reliable mopar trans?! You just haven’t waited long enough, it will self destruct. The other issues are typical mopar junk issues though

It's an eight speed I think. I drove it several hundred miles last summer and the transmission was the best part of the truck. The seat was the worst. It was like there was something wedged up against my right thigh, giving me a charley horse by the end of the trip. I tease her by telling her she's going to get a Ford Lightning Electric. She give me the, "you're dead to me" look. This is the girl who wore her cowboy boots when I first took her hiking.
ElevatorGuy

You don’t need good seats when the truck is sitting in the repair shop. However those heated tailgates are slick when you need to push that garbage off to the side of the road in the winter time!
You must log in or register to reply here.

What tools do you carry in your truck?
2 3

T
Thinking of leasing a truck - which way to go?