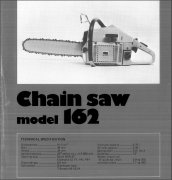 The 140S and 162SE were the first saws with what has become the standard layout for all professional chainsaws, oil tank at the front of the crankcase, suspended fuel tank and handles. The 162 was also the first Husqvarna with electronic ignition from the outset.
The 61 is almost identical to the 162, with only different cylinder porting and carb mount. Both are 61.5cc.
The 262 has the same bore and stroke (48x34) but is derived from the 254 and has no shared major components with the 162.
arto_wa

Thank you, I appreciate the help!
SawTroll

It actually was the very first model in that "family", that often is referred to as the "162-family" for this reason.
The 162 production in Sweden was discontinued when the 266 appeared around 1982 - but continued at the TOMOS factory in Yugoslavia for some markets (mainly Eastern Europe).
At about the same time Husky started making the Jonsereds 630 (initially with the "s"), that was based on the 162SE, but not exactly the same. This was the first Jonsereds/Jonsered model that was made at the Husky factory.
Huskvarna hotellgäst