Jasonrkba said:
Is that automotive wire?
Click to expand...

Interesting! A D44 with a left hand starter?

I got the oilers working on the 1-70 & the 1-75.Some clown on FB told me that I had to take the tank handle off in order to fix 'em,not true.I had to take the 4 bolts out that hold the tank on & the 2 bottom bolts for the front handle.First I did a practice run on the seized 1-70 so I knew what I'd be expecting on the other saws.Boy,that seized 1-70 must've been left outside for quite a while,that plunger piston was seized in there pretty good,but I got it freed up.I don't know if that piston is any good - rust all around it.
Then I moved on to the good 1-70.I pulled the tank off that saw & that plunger piston was seized too.I used some WD40 & tapped it down & it broke free.I put it back together & it oils great.
Next was the 1-75,this was the easiest fix I ever had.Something told me to try it before I tore it apart,I did & it started working just fine.I tried that oiler several times & it was stuck.That time it broke free & started oiling just fine.
Now the only thing left is to pull the carb off the 1-70 & rebuild it.It's got a Tilly HL19D.
heimannm

Sent from my SM-N970U using Tapatalk
Click to expand...

I think they just took what ever left over parts they could find and sort of piled them together to resemble a saw. That flywheel housing will not bolt up with the Super Series chassis.

PogoInTheWoods said:
Ran across this vid this morning from Mac 131 regarding servicing the duckbills on the more stubborn Mac fuel caps that used the molded aluminum inserts for the vents. Definitely worth a look and a thumbs up. He's evidently restricting access and you'll need to use the 'Watch on YouTube' link to watch.

Anyone know what happened to this guy? His channel doesn't seem to exist anymore.
Did he just grow tired of it or was his channel zapped?
heimannm

He moved to another "site", someone informed me what it's called but I don't remember the name.

I hope he landed on his feet somewhere. Seemed like a sincere and humble guy just wanting to share what he was learning while cultivating his channel with some good will along the way.

Would be a shame if he fell victim to the lurker a-holes and haters out there just looking for a party to crash.
Maintenance supervisor

Manic84 said:
Anyone know what happened to this guy? His channel doesn't seem to exist anymore.
Did he just grow tired of it or was his channel zapped?
Click to expand...

He switched to another platform, Vimeo? I think.
2broke2ride

Also, is anyone else having problems loading pictures using Tapatalk? It's getting annoying having to switch to web view to see pictures.

2broke2ride said:
Also, is anyone else having problems loading pictures using Tapatalk? It's getting annoying having to switch to web view to see pictures.

Sent from my SM-G981U using Tapatalk
Click to expand...

Fixed it, I just had to log out and back in lol, sometimes it's the stupidest things [emoji28]

Kevin - I have some notes telling me McCulloch & Sugihara bars use 108 with a new chain and 107 once they are stretched a bit. You might get by with 107 but have to put everything together off the saw and slide it on with the chain engaged in the bar and sprockets, there may not be enough slack to walk the DL's over the nose of the bar with the clutch and bar installed.

Thanks Mark, I think I'm going to try the 107DL since it's an off the shelf size. i do have some remnants of .404 chain here and presets, so if I have to add a DL its no big deal really.
heimannm

I am looking for some Carlton D3 presets (1/2" pitch, .063 gauge) just in case anyone out there knows where I may find a few.

Not the limited edition with improved choke lever then? 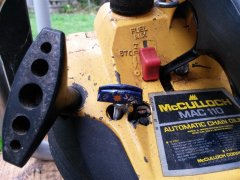 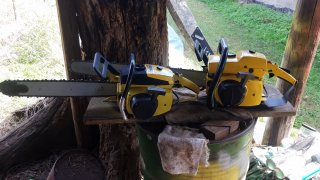 mogulmasher said:
I had a 6-10 with a yellow cover.
Click to expand... 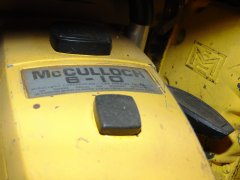 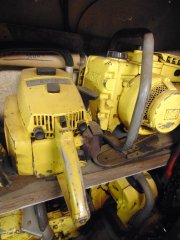 Any one got some ideas on air filters for the 10-10A. I think the original filters suck at keeping out the fines. Has any body tried putting a foam over the flocking crap? Any ideas? Would they possibly fit?
Maintenance supervisor

lohan808 said:
Any one got some ideas on air filters for the 10-10A. I think the original filters suck at keeping out the fines. Has any body tried putting a foam over the flocking crap? Any ideas? Would they possibly fit?
Click to expand...

I bought a sheet of uni-filter material and sowed it on the filter element (frocking was gone) with fishing line. Sort of a DYI Max flow filter. It works well, and is actually intended for that purpose.
You must log in or register to reply here.