12mm 044 with ported OEM cylinder+Meteor piston pair. 3.5 tanks through it since full rebuild.

History: I bought this genesis of this saw at the beginning of COVID from David Major as a runner at market rate. It arrived from Hungary and immediately proved to be an unusable basket case, with cobbled together homemade crankcase gaskets, a bad crank, an aftermarket cylinder that made no compression, a tweaked half-wrap, and bad A/V buffers. No ding on David Major for this, I have no reason to believe he knew how screwed up it was and I just ate the loss. Since it was mostly junk, I decided to go all in.

I sent a couple OEM 12mm non-decomp cylinders and Metor pistons to Kevin (huskihl), and he ported both sets. Crankcase was rebuilt by my friendly local saw shop for me with used crank, new bearings, new seals, new fuel lines, clutch parts, starter parts, and a bunch of other bits. Invoice was upwards of $700. Ported P/C was installed on the rebuilt crankcase. I later added the 3/4 wrap bar and the non-OEM dual port cover (which is peeling paint as it cures, yay China!).

I've run about 3.5 tanks through it, 2.5 of them went though it today. It is breaking in and cuts like mad. Every few years I fall victim to the siren song and get this idea that I need to pay the saw shop to fully rebuild an 044. The past 3 times it was a 10mm saw, this time a ported 12mm non-decomp with the oldschool air filter. Then I quickly realize, as happens every darned time I do this, that I do not actually need an 044 and I sell it.

So I'm selling this machine, as seems to be the natural course of things for me, and promising myself that I won't do this foolish crap again.

I've run the saw in a bit and it does not seem to need anything. There are a couple bits I never got around to doing, though, and you might want to finish them up. First, it would probably like to have a few degrees of timing advance; it runs like mad as it is, but rumor is that a few degress would make it run stronger. Second, I never opened up the OEM muffler outlet or modified the internal basket/cage/baffling; it does have the dual-port cover, but it would probably like to have the muffler outlet opened up to the diameter of the deflector.

I can get additional pictures if anyone would like, just let me know what you're wanting to see.

Asking $875 shipped CONUS. Paypal FF or Venmo. I will ship FedEx unless you have a strong preference for me to use a different shipper. 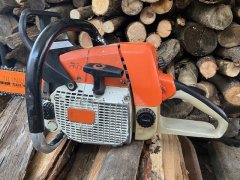 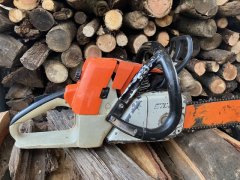 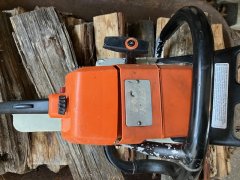 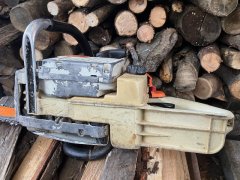 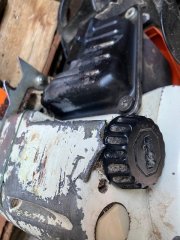 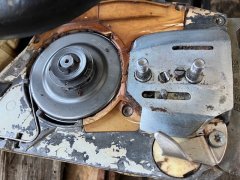 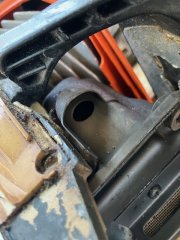 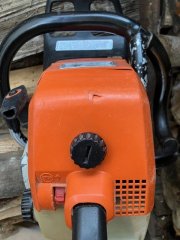 I am NOT a tree freak.

I ran this today... Shes a runner only going to get better with age.