sb47 said:
I have thought about slabbing a stump and then gluing and screwing some plywood to the underside to try and stabilize the slab but I have never tried it.
Click to expand...

Oak checks bad no matter what you do. I've seen where a guy took the big cookies and cut them like a pizza, then when dried, glued them back together. He'd get the growth rings gs lined up pretty good. You could hardly tell it had been cut in pieces. It was a lot of work, time, and space. He could make a lot more money with easier slab projects.
djg james
D

rarefish383 said:
They used to use anti freeze, does the same thing, similar chemicle make up. Dangerous around pets.
Click to expand...

Yes I've heard of using antifreeze. The Propylene Glycol antifreeze is safe for pets, but not the Ethylene Glycol stuff. Still I worry about putting a finish on wood containing either.
JustJeff

I have been told, perhaps incorrectly, that if epoxied completely it holds the moisture in and it won't split. I have no experience to back this up

Sent from my CLT-L04 using Tapatalk
bob kern
B

Lnk said:
One time, at band clamp. Sorry, had to.
Click to expand...

JustJeff said:
I have been told, perhaps incorrectly, that if epoxied completely it holds the moisture in and it won't split. I have no experience to back this up

Sent from my CLT-L04 using Tapatalk
Click to expand...

I have thought about trying some all thread rods and bore a hole through it and bolt it together it might hold up, but I have not tried it. I have also thought about making some brackets out of an I beam and heat them up and pound them in the split like a butterfly joint to lock the wood together. Kinda like a steel wood drift key, but again it's something I haven't tried.
GenXer
G 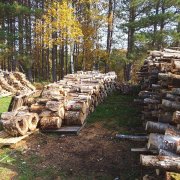 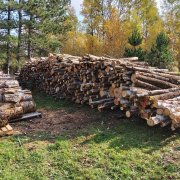 rarefish383 said:
They used to use anti freeze, does the same thing, similar chemicle make up. Dangerous around pets.
Click to expand...

Pour Ethel glycol works well expensive . Any alcohol would work it displaces the water in the wood cell and doesn’t shrink when it dries
Brufab

I see some big birch in there atleast to michigan standards that is.
SS396driver

Installed today only mod I had to do was remove the center carrier bearing bracket as it would hit the shaft when fully loaded . I knew that going in , I would recommend to anyone with a two piece driveshaft smoother than new . Truck always had a launch shutter because of the torque and center carrier bearing it’s totally gone even with the trailer hooked up.
MustangMike

I always liked the 35 Winchester and wanted to find one (they were only chambered in the Mdl 95). Seems the cartridge should have fared better than it did.

Then I got the 348, and ballistically, they are almost the same.

LondonNeil said:
My guess (no experience what so ever) is it needs to dry uniformly throughout. I guess normally the outside dries faster and shrinks faster than inside so the outer ring can't reach around the less shrunk middle and must split. Dry slowly and it's going to be more even
Click to expand...

I think the opposite. The reason is the bark is a natural moisture barrier so the only way it can dry is through the end grain and that would make it dry more from the inside out. I think I would have to remove the bark for it to have a chance to dry equally on all sides. But the bark is one of the things that make it look more rustic.
Cricket
C

SS396driver said:
Average season about 5 to 6 cord. All in the basement no need to get cold or handle cold frozen woodView attachment 943991
Click to expand...

So jealous. I have a friend who has that setup - they dump it down the chute, stack it as they get around to it, and it's bone dry. Sigh.
Cricket
C

Lionsfan said:
I'd bet my in-laws have burned that much already this year. Fire hasn't gone out entirely since late September and it's one of those big, old, poorly insulated (mostly uninsulated) farmhouses.
Click to expand...

" it's one of those big, old, poorly insulated (mostly uninsulated) farmhouses."

Got me one of them. I did tear out the windward wall of the living room a few years back, put up Tyvek and roll fiberglass, and put the 160 year old planks back up with their square nails - because one day I realized I could see headlights through the corner beside the gun safe... but I decided cutting more wood was less PITA than doing *that* again.
mountainguyed67

Cricket said:
So jealous. I have a friend who has that setup - they dump it down the chute, stack it as they get around to it, and it's bone dry. Sigh.
Click to expand...

No insect problems? If I remember correctly someone on this site brought termites into his house doing that.
old CB
O

Even though most of my firewood is scrounged, I rarely document it. Just never think or bother to get photos.

But yesterday I was cutting dead pine in the national forest (got a $20 permit) up the road, and realized I should have brought a camera. What I found was two Ponderosa Pines with almost a common root area that had blown over from their perch on a rock outcrop. These two, dead for a year or two, had blown over such that both tops were hung up in a neighboring tree and they were suspended off the ground by numerous limbs stabbed into the ground. The surrounding large rocks were not particularly steady. Pretty much an inherently hazardous situation. The trees were uphill from the road—not a great distance, but farther up steep rocky ground than anyone would want to work to retrieve firewood.

So I set a block in a tree down on the far side of the road and ran my rigging rope through the block and up to the first tree. After severing it from its stump and removing some limbs, I hitched the rope to the tree and other end to my pickup and pulled the tree downhill. To where I could cut and load wood onto the pickup bed. Brought home a full load from the one tree yesterday. Today I took my camera along for the second, smaller tree. So here’s pics:

First, a few rounds of trunk wood in the pickup from yesterday’s load 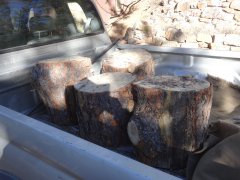 Then a shot to show snow on the peaks of the continental divide about ten miles from here. (Despite what's up there, we're still having September weather here, unnaturally warm, but I'll leave all such comment for elsewhere.) 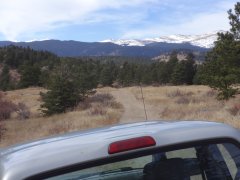 Then, the remaining tree in its hung-up situation. 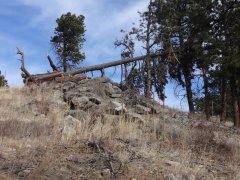 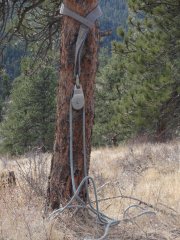 And a shot of the tree pulled partly down the hill, till a busted limb hung on a rock. I trimmed off remaining limbs and brought it down to roadside. 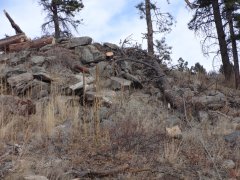 And then the loaded pickup before I left for home. Quite a smaller load than yesterday. 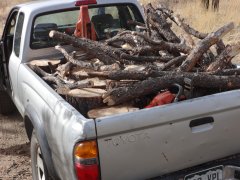 We don't have termites here in WI. Just have to watch for carpenter ants. We get the odd moths and spiders when we bring our wood in the house for the winter.
bob kern
B

Lee192233 said:
We don't have termites here in WI. Just have to watch for carpenter ants. We get the odd moths and spiders when we bring our wood in the house for the winter.
Click to expand...

Cricket said:
So jealous. I have a friend who has that setup - they dump it down the chute, stack it as they get around to it, and it's bone dry. Sigh.
Click to expand...

I put plywood on the steps and toss it down from my dump trailer. Never had a problem with insects wood is dry before I put it in and ants/termites need moisture so they move on . One year we had spiders though just small ones . 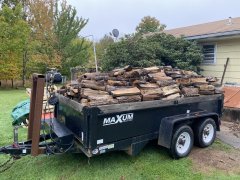 What I didn't mention is that I do not need firewood at the moment. Have enough to last me well into next year. What I need, though, is exercise.

Had knee surgery in August. My knee difficulties put me into full retirement a few months ahead of schedule. Limping around on my right knee during recovery threw my left hip into serious disarray (physical therapy got me out of that predicament), and only in recent days have I been able to walk like a normal human being. Which means I'm seriously out of shape. I'm no good at any kind of exercise regimen, have always gotten my exercise from work, so work like I've always done is what's called for. Lord, it feels good to be back at it.
mountainguyed67

Does the cold kill them? I know a couple years ago people were hoping the temperature would drop enough to kill the bark beetles.
You must log in or register to reply here.