There was a conversion to a more modern hybrid trigger module available after a certain serial number. Those saws had a different case that accommodated the required screw to mount the newer trigger, but would also still accept the donut version. The coil remained the same.

I'd pop that flywheel to see what's under it and go from there.
PogoInTheWoods 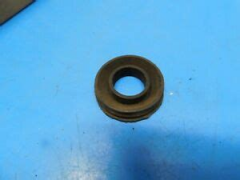 Where on a wrap around handle 075AV does this go?? VS these conical shaped ones, which I know: 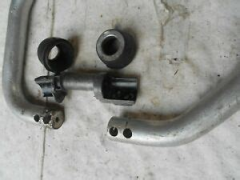 Thanks. When I tore them down there was nothing like it, just a deteroriated rubber cone with it's metal pieces. I was wondering if it was a replacement for the cone, but it doesn't fit alone.
PogoInTheWoods

Between the two mounts maybe? Kinda looks like it could be #38 in the IPL, though doesn't seem to be the correct shape. Stray part from something else? 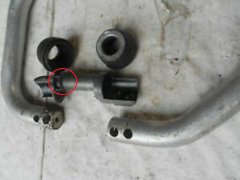 Got it!! Thank you. Tight fit and a bit of oil.
PogoInTheWoods

I'll get a pic later. On the two wrap around handle saws I tore down the AV bushing on the clutch side was a swollen, oil soaked mass of crap. Putting them back together with the two new conical guys, big ends facing each other, the oil from the chain oiler has easy access to the clutch side bushing. This flat guy just fits over the handle and press fits into the hole, outside the clutch side cone shaped one. It acts as a nice oil seal, not an AV component. Cool..... it appears to be an answer to an early problem on the wrap around handle setup. Photos coming..... have to dig out the camera. Next question, to run the compression release or not. I've heard the arguments about the release losing its seal in time. There are little washer inserts to renew the seal. I'm old enough that starting 075's is no longer fun, so I'll run the CR. One runs the Granberg Alaska Jr. mill, the other for felling. Third saw for the heck of it.
PogoInTheWoods

A decomp valve is a lot easier to replace/service than starter parts and a helluva lot cheaper than rotator cuff surgery. Them wearing out is sorta overstated IMHO, too.
It's there for a couple o' reasons. Using it is one of em. LOL
bulletpruf

The top part is the "sealing ring" part no. 1111 799 0500, and #38 on the IPL that I checked. This piece is only used on saws with the full wrap handle and they are quite difficult to find! If anyone has spares, please let me know. I need a few more.

In the bottom picture, the two brackets are connected. The piece on the right has the metal tube and it's used on all saws. The piece on the left is specific to full-wrap saws and it's the "handle tube bracket" part no. 1111 791 1907. Same as above - this piece is difficult to find and specific to saws with a full wrap. I need a few extras of these, too.
You must log in or register to reply here.