rwoods said:
I thought about you spring board PNW fallers a few Saturdays back when cutting this white oak - I told myself that I had no right to complain.

Spring boards are fun, until your up 2 or 3 levels and realize you have to get off the damned thing in a hurry... Best part is hooking your toe and "hopping" it around to get access to the offside... while the homeowner S's their pants...

DAAAAAAANG that is a nice old McC. Color me envious!

(tree ain't half bad either)

madhatte said:
DAAAAAAANG that is a nice old McC. Color me envious!

I gathered a few of the 82cc ten series and the SP125s before they got so expensive. I have since thinned my working herd down to 4 of the 82cc and 4 SP125Cs. This spring I busted the crankcase on by one and only purchased new MAC - a now 40-year-old 70cc PM700.

Glad to be back at the range. No real cutting as it has been dry enough to haul a few loads down the hill. A three-hour round trip of only about 15 miles. I need to borrow NM's self-loader - that would shave 30 minutes or more off the trip and haul 4 times as much.

Ready to be strapped, the first load down the hill in months. As you can see, I don't have a headache rack or bunk stakes, so I limit the loads, secure with five straps, keep under 5 mph off the pavement and 30 mph on the pavement, and stay off the main highways as much as possible. 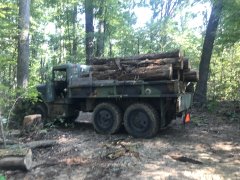 Little crawler is coming in handy. This ash log was too heavy to safely skid with my wheel tractor. 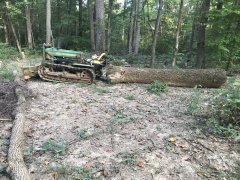 dumb truck loads are fun lol.
with a headache rack it only encourages you to stack em over the cab so you can see the butts as yer driving down the road...
I would only throw 2 wrappers on a load that short, you do you though, 3 would be overkill if you ask me, even without a headache rack.

Thanks. Putting a log from my trailer into my tailgate this spring and the steep hill encourages me to over strap. Those logs are pretty slick as many loosen all of their bark on the ride.

also, the Self Loather isn't real good at off roading, steep ungraveled roads are problematic, up or down, hell even graveled roads can be a problem if its steep.
That said it takes about 1/2 an hour to load, and 15 min to unload... I think it takes longer to load just because of all the BSing, or could be the piles of pick up sticks I get left.

I can make a nice looking log pile 10 times as fast as it takes me to move the logs from the pile to the truck. Using a root grapple is a part of the problem.

If I didn’t know better I would say you are qualified to join us at Blind Squirrel Falling.

To answer your earlier question that I missed - my loader: 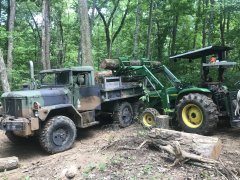 We slipped concrete Saturday, so I had my alarm for 2:00 AM that morning. I set alarms I don’t use much up for every day so I’m set if there’s a stretch of them. I was on site for just shy of 16 hours and finally got to sleep around 11:00 PM courtesy of a couple of fire runs.

Well… Was I upset at 2:00 AM this morning when I didn’t have to get up at any set time.

SET BACK BUT BLESSED

As stated by Robert Burns, “The best laid plans of mice and men often go awry.”

Saturday was predicted to be a breezy day, thus unsafe for falling dead trees (and it was). In addition, my three girls and their husbands were coming home to watch the Tennessee/Georgia game at 3:30. Despite the short day, I had planned and anticipated a record day of at least three loads to the woodlot. The plan was simple and began the week before: Stage stems and leave a loaded truck and the tractor at the bottom of the hill. Arrive at daybreak. Run the first load to the woodlot. Return, buck stems, re-load. and repeat. As it turned out, matters at home absorbed an hour of daylight so the first load left later than planned.

Ordinarily, I stage logs in piles through out the woods on this site, then a pile at a time I select which log goes where when loading the truck and strap with the rackets on the safest side, given the lack of stakes. However, the first load Saturday was made up of odd or overlooked logs loaded as I drove the truck through the woods – as shown in the picture, it was just a hodgepodge mess with a precariously placed large ash log partially sitting in a shallow valley. 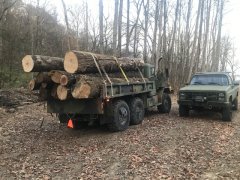 Two miles down the road, I was thanking GOD for run-flats when I blew a tire. After limping my way for a mile or so to a convenience store with a large parking lot and having no spare, wrench or jack, I called for assistance. 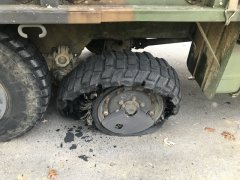 The woodlot has been extremely shorthanded lately so I was surprised when five men and a teenager arrived with three dump trailers and a skid steer as there was an abundance of workers at the woodlot Saturday. In short order, we had the logs unloaded, shortened and loaded in the dump trailers; the middle axle lifted and chained to the frame; and the crippled truck headed to the woodlot.

As I have posted before, I only recall my father teaching me two things about cutting wood - #1 never stand in the line of a chainsaw bar and #2 never unnecessarily walk beside a loaded log truck. Heeding #1 probably saved my life 40 years ago when a kickback sent a 35# gear-drive bow saw over my head. Not heeding #2 almost got me killed Saturday.

While getting ready to unload in the convenience store parking lot, I release the straps from the “safe” side. Then instead of just leaving the straps clipped on the other side, I decided to unclip them which required a slight downward tug on each. When I unclipped the last one, the ash decided to abandon ship. Thankfully, the last clip was nearest the cab. I stepped back as the ash rolled off the truck. Fortunately, nothing was in its path except a protective railing at the edge of the parking lot.

Looking at these two pictures, it is clear that that the load had moved and with the tilt of the truck the ash had become more dangerous than a cocked and loaded gun with a hair trigger and the safety off. I can’t honest say that I looked at the load from either angle to determine if it was safe to walk on the other side. I was relying on the fact that I observed no movement when I released the straps. I could say that it was just a dead ash trying one more time to get me, but the truth is I was not vigilant and simply blessed not to have been crushed. 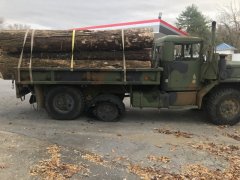 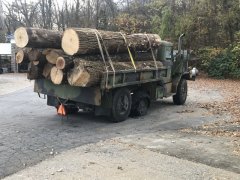 We returned to my pile after lunch, bucked the stems to trailer length. Loaded and hauled them to the lot in dump trailers. 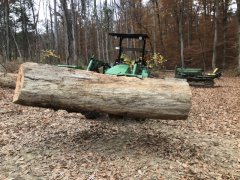 With all of the unanticipated help, I was able to meet my original goal, including making it home in time for the family. Too bad Tennessee wasn’t so blessed as Georgia ate their lunch.

Note to self: Engage brain and leave it engaged.

last dec blew the motor in my dump truck, took until june? to get parts and gave it back together head gasket was leaking, so i took it in fir warranty werk a month ago... picked er up this morning, blew head gasket within 7 miles

and, just seen a deer using a cross walk, waited for the light and everything

think i need a nap
W

northmanlogging said:
last dec blew the motor in my dump truck, took until june? to get parts and gave it back together head gasket was leaking, so i took it in fir warranty werk a month ago... picked er up this morning, blew head gasket within 7 miles
Click to expand...

Saturday at 8:50 AM
bucketofguts
B