In my somewhat-experienced opinion, the coolest-looking of all saws; I call it the '57 Chevy of saws, given its rounded lines, etc. - And....the dating works, as well...

This is a generally-nice, original example. Had intended to do a repaint but....been trying to organize, and, thus, letting some things go....that I really shouldn't...

- Certainly appears to be original paint, in sound-enough condition to be a desirable example, as it is... Or,
as I had intended, a repaint is always an option.

- I acquired this a few years back; it started right up. I, then, went ahead and ordered an OEM carb rebuild kit,
so it would be nicely-refreshed for the next 50 years! The kit still awaits its opportunity to serve...
- It is lacking the 'Pioneer' original logo on the top, BUT....I found something that looks at-least as good, which
can be mounted(visible in the photos, sitting-loose, in place). And, there is a central plug lacking on the top cover,
but surely something suitable can be found for that spot. - Otherwise, it appears complete and original. The bar
has had some weld repair near the front end, but appears quite sound and servicable.
- I also have a spare OEM pull-start return spring, just to have because I came across it, and may have some
other spares, as well.

Offering the whole package, for just $300.{Comfortably-under my investment, and that's only the saw...} I'm sure a collector will treasure this saw, and do it right... Will ship at actual-cost-only, which can
be determined once the saw, and bar, are separately packed.

Put it on Craigslist some days ago, hoping to avoid packing-to-ship, as an extreme ADDer...that can be demanding...

**I have a few more photos, that are....{so disgusting that} the decorum prohibits listing them here..... errrr, sorry, wrong movie... [Animal House,
by Neidermeier, at the hearing...] Perhaps, those additional four photos, will be visible at the bottom of this posting:
https://www.northeastshooters.com/x...chainsaw-the-57-chevy-of-classic-saws.392547/

Neat old saws. I have two on the shelf for future rebuilds, both saws are complete. Plus two boxes full of NOS parts. One day I will rebuild one, this Covid winter may be the time. 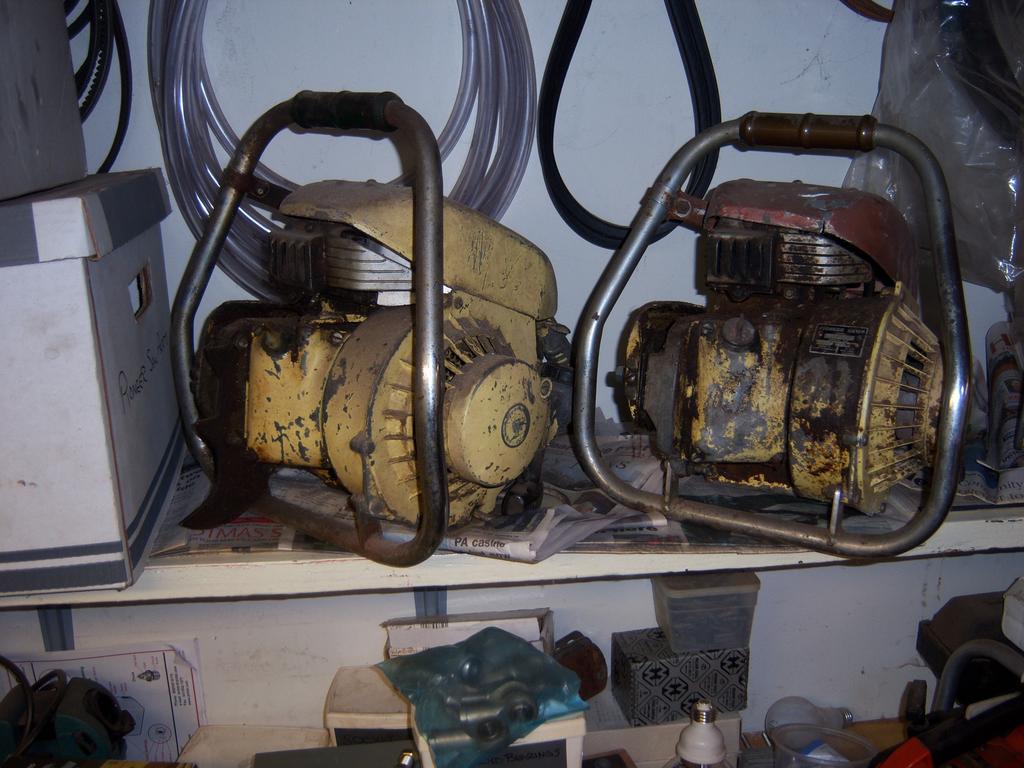 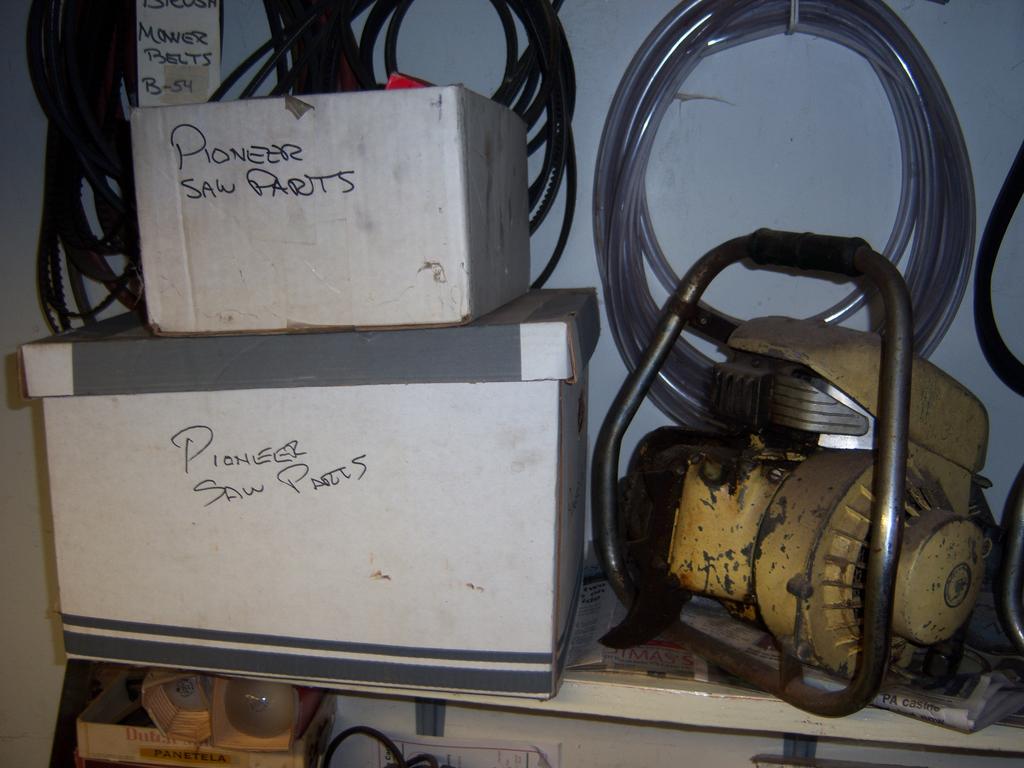 I agree, very cool looking saw. I have one I restored a few years ago. I hope someone meets your price because that means mine is worth a whole lot more.
rocketnorton

makes me wanna hear one o mine run.
the other is unrestored in avatar pic

I really should drag ‘Fat Alice’ out of retirement. Put in new fuel line for sure.
Ancient One
A

If I did not have two I would buy yours. Nice start for a full rebuild.

Looking forward to getting one running and see how it compares to my 795L McCulloch. Nearly the same displacement.

I even have two NOS top covers. 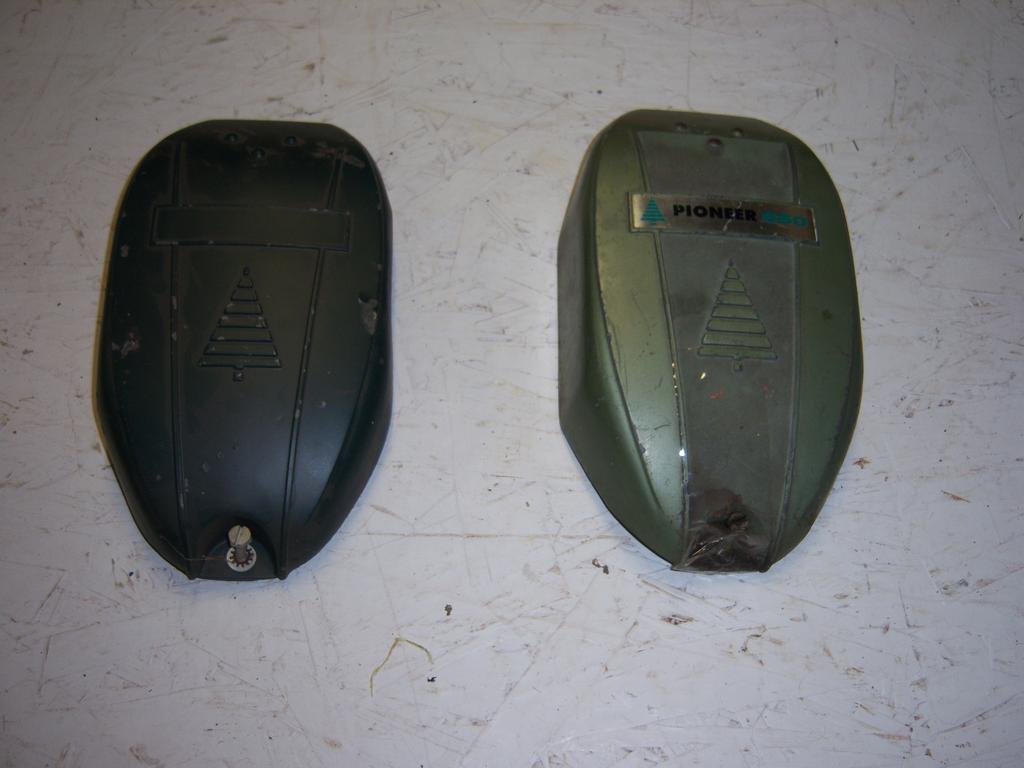 Ancient One said:
If I did not have two I would buy yours. Nice start for a full rebuild.

Looking forward to getting one running and see how it compares to my 795L McCulloch. Nearly the same displacement.

I even have two NOS top covers.

These are not RA covers.
Ancient One
A

Yea I thought they were different, not the same form. But I am a Mac guy, my knowledge of Pioneers is non existent.

Thanks for the correction.
RenaisSAWnceMan

Alright.....she's been sittin' in the front hall..... (the saw, that is...the wife is still locked in the basement...)....and, since I just gotta continue with the ADD-busting
clean-and-organize effort, just plain $teal her now, for $200, plus actual-co$t shipping.

Guess I still need to get a photo of the bar and chain taken/posted, but...it does exist, and is included.

AND....she does put out an anti-C19 fog, so.....you should be able to go anywhere, without a mask, as that fact will be readily-enough recognized.

IFFin' I were to put her back in the basement, she might get......abused, by the, ahhh..... So, save her, for the posterity.
You must log in or register to reply here.