Have you watched a rope fail in-use? Please explain!

I'm perpetually amazed at how strong ropes are, am also frequently thinking about how much overkill we use (not that that's bad!) and it got me thinking/curious about when ropes do fail- if you've ever witnessed a failure I'd love to hear about it, w/ as many details as possible! Thanks


PS- Is there a rule-of-thumb for WLL on a rigging-anchor? I'd guess there's varied WLL's depending whether it's to hold a speedline, or to hold a line you're blocking-down / negative rigging on, but I've never heard any rule-of-thumb guideline for this and always just see people blindly over-shoot..

[edit- I actually had a chance recently to try popping a rope, a 3/8" tag-line I've used heavily the past year for pulling/bracing/etc, was dropping what I calculated to be nearly 1k onto it and it wasn't breaking, was well past its kN MBS but I'm unsure how to calculate rope-in-system for that type of thing, was still really amazing to see a puny rope take dropped loads!!]
Blue Oaks

I was 12 when the zip line we made out of cheap little yellow nylon rope failed on me. I fell about 12 feet and landed right on my back. I was sore for about six months.
eye.heart.trees

Haha I was hoping for job-site use but glad to hear it wasn't more serious ie life-long (6mo at that age must've felt like an eternnity though!) No chance you remember any details? I feel like you could get that to work if you had a really fat rope (it's that plastic-y yellow rope you mean, the type that floats?) and a 2" wheeled pulley (for how bumpy that stuff is), imagine that's not what a 12y/o does when setting this up though ;D

I was afraid of the ropes' integrity when I began climbing, so funny to look back on that because I would have to really really hurt myself to generate 1/10th of a failure-load on my rope lol, if anything the nylon holding my dorsal ring on my harness is probably my weak-point (and it's not 'weak' by any stretch of the imagination)

Ropes are awesome, am hoping to hear *some* failures though!!!! Am constantly amazed at what they'll handle but I know someone's overloaded something, shock-loading when you're just eyeing it isn't 'exact science' I know people have popped ropes c'mon let's hear I'm curious if anyone's ever broken an anchor or if it's always just popping the bull line itself (gonna google "ripped 3/4" tenex" and the like to see if I can find failure anecdotes elsewhere to edit-into this)

A totally different setting, but I think the lesson is applicable to any use of rope under tension.

Many, many years ago I was among the crew working on the fantail of a Coast Guard cutter using a nylon towing hawser (to the best of my recollection 6", maybe larger, double braid) to attempt to pull the anchor of a monster sea buoy so we could tow the buoy to port. The hawser had several wraps around the capstan on the fantail, several hundred feet of hawser extended to the point it was attached to the buoy's anchor line. The Chief Boatswain's Mate heaved around on the capstan, tension was slowly put on the hawser, and it became obviously very taut. The hawser snapped. Fortunately it snapped at the capstan and flew in a perfectly straight line over the stern to disappear forever into the depths of the Pacific Ocean. If it had failed at any other point, at least some of the hawser would have whipped back across the fantail, and probably would have killed every one of us who were in that area of the ship.

We were stupid not to have recognized the danger.

We were stupid to have most of the deck department on the fantail in the danger zone.

We were lucky that when the hawser did break, it did so at the one point it would cause no injuries.

Since then I have been very cautious when a rope has tension applied, and always consider the area across which it might whip if it broke at the worst possible point. Sometimes it is necessary to be within whip range, but if possible I keep the area clear, or at least minimize the number of people exposed to the danger.
Blue Oaks

Shiny new Member. Only dropped once...

Indeed.
Chains and cables are pretty spooky as well.

I use 1/2" Stable Braid rigging rope for my work. It's entirely sufficient for the trees I encounter in my work, though for lots of tree work it would be insufficient. Its rated average breaking strength is just over 5 tons.

Once, six or seven years ago, we snapped one. We pull a lot of trees and tree parts around the landscape, pulling with a pickup. (I was skidder operator for a logger back in the 1973, so skidding comes natural for me.) My routine is: I do the rigging, my help drives the pickup, and I direct with hand and voice signals while watching the progress of the skid, ready to stop action if things go south. I always stand far from the rope, and consider where best to stand, in case of failure.

So my guy was pulling a tree, the rope running through a redirecting block (not that it makes much difference), and I was directing. There was a small stump I didn't see, and when the moving tree butted up against that stump the tree stopped moving. Before either of us knew what happened, the rope snapped. Sounded like a shotgun blast, sure got my attention. The homeowner was a former Coast Guard career guy, and he knew from the sound exactly what happened (he and a builder working at the house were outside in a flash). I've been way careful about scouting the route ever since.

You want only very strong line (rope, wire rope, or whatever) to rig with, which means if there's a failure, the forces involved can be deadly if anyone is nearby.

So the rule of thumb is working load limit (WLL) is 1/5 of average breaking strength for static loads, 1/10 of ABS if shockloaded. Best to avoid shockloading if at all possible, but it comes into play sometimes.
old CB
O

STIHL the BEST said:
Indeed.
Chains and cables are pretty spooky as well.

A guy (not a pro tree man) was telling me recently that he preferred moving trees with chain rather than rope. Which made me remember that sometime in years long past I overworked a chain. Can't remember the application, but it was logging chain. A chain when pulled beyond its capacity--all the links go from being nice ovals to straight-sided things you can never again work with. Every material has its limits, and you want to work within them.
chipper1

Richard does a lot of load testing, you can go to his channel to see more, but here's a few.

I've snapped a couple ropes over low value targets like lawns or a split rail fence. Each time, because I used rigging that was too small, the job was underbid and it was late in the day. Ultimately, the reason they failed was because the ropes were too small, rigging carabiners aren't wide enough and the shock load was too great. I thought I could get away with a 1/2" line and carabiners when I should have moved to blocks and 3/4" or taken smaller pieces. Haste is a *****.
Groundman One

I don't recall ever seeing a good line fail in "serious" use. We've had cheap ones fail when the truck was pulling a log out of a ditch or something like that, but not in in-the-tree use.

But then, in Dynasorb we trust! 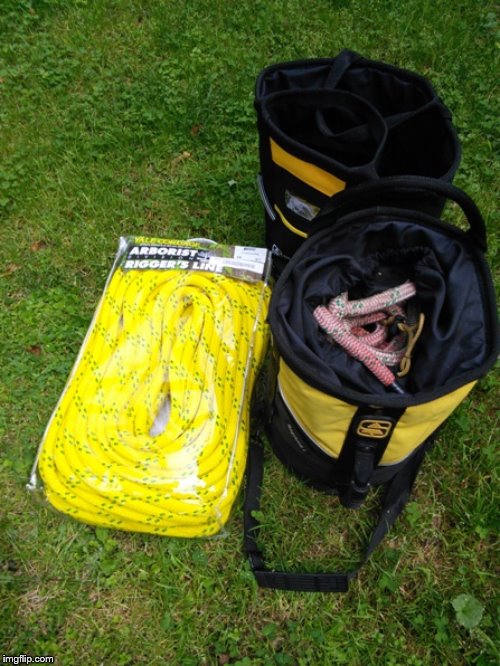 I have snapped 10mm. 12mm, 16mm and I think what was a giant 50mm line while rigging. WHen the 50mm snapped it sounded like a cannon shot, brought people out of there houses for 4 blocks where the 16mm rope sounded like a rifle shot
derwoodii

i had a solid trunk of pine up embankment and needed to keep it from rolling free when we dropped it.. so rigged a 14mm line to snatch it keep secure. Log dropped the line held till last moment then failed bang! just as the logs momentum stopped phew as houses below were in the line of run away..

TimberMcPherson said:
I have snapped 10mm. 12mm, 16mm and I think what was a giant 50mm line while rigging. WHen the 50mm snapped it sounded like a cannon shot, brought people out of there houses for 4 blocks where the 16mm rope sounded like a rifle shot
Click to expand...

How in the name of baby Moses did you break a 50mm line?
TimberMcPherson

gorman said:
How in the name of baby Moses did you break a 50mm line?
Click to expand...

Found the thread about it here

One time the neighbor got a farm truck stuck in a muddy field.

No problem, get the big tractor and the big chains. I don't know exact rating on the chains, but there were four of them and each segment was 10' and it was all a couple guys could do to move a single segment around, guessing 5/8"+ on the link size.

Young guy in the tractor pulled and it just spun the tractor tires and made it power hop something awful. Farmer told him to move the tractor over and try again from a better angle. This time he didn't ease into it, don't know what happened but he rolled into it. Chain snapped near the tractor, making a huge noise, and then recoiled into the front of the truck, taking out the bumper, radiators and aftercooler and jamming them all into front of the engine. Steam, hot oil and smoke! Quite a show.

I still remember the look on the farmers face. He was reasonably calm about it though. Took another smaller chain to pull the first one out of the truck. They hooked everything up ten feet shorter, eased the truck out, and then pulled it back to the shops.
You must log in or register to reply here.
Share:
Facebook Twitter Reddit Pinterest Tumblr WhatsApp Email Link