Taking sharpness to another level.

MontanaResident said:
That is an absurd price.
Click to expand...

Most of the sharpening jigs I've seen for sale are insanely overpriced, IMHO. The same goes for the Tormec system, considering that Grizzly makes a rig that's 80% as good for about 1/3 of the price. The only thing I can figure is that the Festool fanbois buying a lot of this stuff have more money than sense.

Aside from what you use to cut the steel (diamond plates or waterstones or sandpaper on glass, etc.), there really isn't that much TO sharpening. Mainly it's about holding a consistent angle at the proper bevel angle, and then being able to steepen the bevel for a microbevel. Anybody who understands the fundamentals and owns a welder (or is fairly handy with woodworking) can slap together the jigs needed in short order.

There are a few jigs that are cheap enough that it's worthwhile buying as opposed to making them. For example, for plane irons and chisels, I use something like this $10 to $15 jobbie, along with a Starrett protractor to set the bevel and secondary bevel angles, and Norton waterstones (I use a two-sided waterstone with 1000/4000 grits since I would rather spend my time cutting wood than steel): 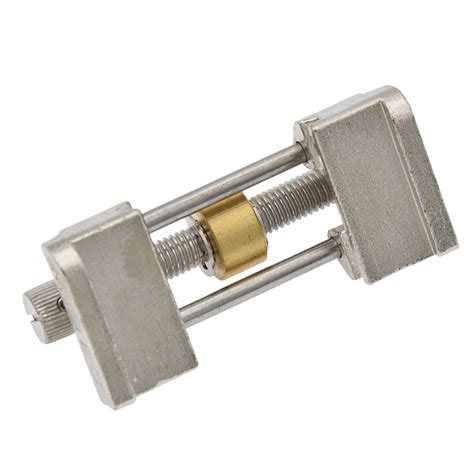 I really like the Norton waterstones a lot. They cut faster than almost anything I've used once you have a "slurry" of abrasives on the stone. The only thing I don't like is the job of periodically flattening them with the diamond stone, which is a tedious, time-consuming process.

For the initial bevel grind on knives (I also do blacksmithing), I use a homemade jig that I saw online made from an angle grinder and a length of threaded drill rod, similar to this guy's setup:


And for grinding HSS lathe gouges, etc., I use a knockoff of the Wolverine system like this with a slow (1750 rpm) bench grinder (my jig is steel, since I have a welder, but wood also works, as this kid shows):


For the woodworkers out there, Paul Sellers has some good sharpening videos on YouTube. It ain't rocket surgery. I think some woodworkers try to make more out of it than there is to it, as if it was some black art practiced only by Tibetan monks.
toadman

Lots of good knife info here!
I used to collect & obsess over knives & sharpness... I still have over 30. Many hand made, and a few real zingers.
my recent favorite for general use is a buck vanguard hunter in s30v.
I like the handle feel, the edge retention is decent, and it takes a good edge IMO.
Nothing special, not the best I own in any metric, but it's a gift from a close friend, and I appreciate that fact more than the knife itself.
the finest grit I go is "coffee mug" which will easily shave stubble off my face without lube, and that's good enough for me!!
Canyon Angler

It's pretty amazing how much knife steels have improved over the past 40 years, especially the stainless alloys. Wicked sharp straight out of the box and they hold an edge way better than when we were kids. Some of the steels used by Case XX have been really impressive IMO. I have one like this:

https://www.casexx.com/LargeImages/381.jpg
for my main deer skinning knife and it's been super sharp since day one. I just touch it up a few times skinning each deer with one of those abrasive ceramic "crock stick" sharpeners and it's good to go.
Bob Hedgecutter

If people are having to wait 15 weeks to obtain your services- maybe less time should be spent polishing saw teeth and more time spent working?
Vintage Engine Repairs

For those who enjoy straight knives (carving knives, edc knives, kitchen knives, hunting knives, fishing knives and so on) here is a video I recorded a while back on the process I teach -

Do you have any idea what grit silver cream polish is? It is a paste and is very smooth to the touch. I continue to use my sharpening system and use paper to hold the polish while I do the final stokes on the edge. 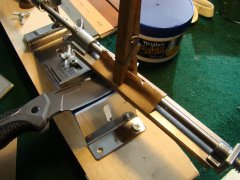 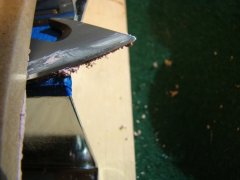 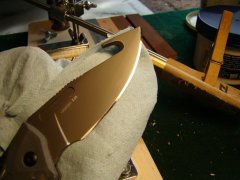 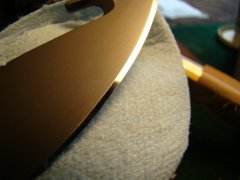 MontanaResident said:
Do you have any idea what grit silver cream polish is? It is a paste and is very smooth to the touch. I continue to use my sharpening system and use paper to hold the polish while I do the final stokes on the edge.

Is that just to use on the strop? I don't use the strop much, and use it dry most of the time. I do find it does a nice finish job, but I usually forget.
MGoBlue

Those who stay will be champions

Almost stropped like finish with a Timberline. Unfortunately my focus wasn't great. 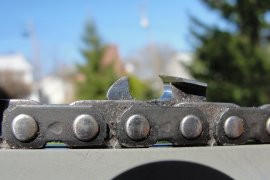 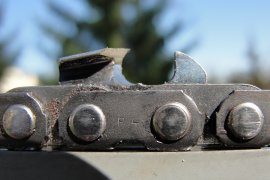 If'n you're planning to polish every cutter for chainsaw chain, I think you have a LOT of time on your hands or you don't saw much.
MGoBlue

Those who stay will be champions

MontanaResident said:
Do you have any idea what grit silver cream polish is? It is a paste and is very smooth to the touch. I continue to use my sharpening system and use paper to hold the polish while I do the final stokes on the edge.

Still a lot of scratches in the last pic..you can see them where the edge transitions from shine to dark.
MontanaResident

MGoBlue said:
Still a lot of scratches in the last pic..you can see them where the edge transitions from shine to dark.
Click to expand...

Yup! And under a 5 to 30 power magnifying glass, it looks like a Moon Crater. I use to try and minimize that, but the sharpness really doesn't improve with the greater mirror polish. Still if I have the time I do continue and go as far as I can. The Silver Cream Polish is a hard path as it is a big jump from the 1500 grit stones that I have. This spring when I start sharpening and polishing, I'm going to try what @Gaudaost does with sand paper before I go to the silver polish.
Vintage Engine Repairs

Very nice finish mate! I’d be curious to know what the (carbide?) micron level is. Looks very sharp and very clean.
You must log in or register to reply here.