Woodslasher said:
I have a spare metal pulley insert I'd send you if you need one.
Click to expand...

Thanks for the kind offer! The metal inserts I think I have plenty of, in fact I literally have one on my keychain that I take everywhere in case I find something that might fit as a flange to attach it to the plastic pulley.
However I will keep that in mind in case I need one.
MacAttack

I finally got my MM35 engine to make a spark. All it took was swapping the condenser, points, and a good coil. So in other words, I replaced the entire ignition system, haha. I stole the ignition parts from the MM30 with the loose crank bearings. Super clean and little running, but I think some dip$hit ran it with the chain way too tight.
The MM35 engine is rough but feels tight, I'm also going to swap the oil pump because the one in the MM35 is missing parts.
I took some pictures to show some differences in the flywheels of the older vs later Mini Macs. The older ones used the crappy recoil pulleys that broke, they had a larger threaded end on the crank and a different flywheel with a larger bore, a wide keyway, and the narrow recoil pawls.
The later Mini Macs used the improved solid plastic one-piece recoil pulley, and the wide recoil pawls. They also used a different flywheel with a very narrow keyway and a 1/2" nut, instead of a 9/16" like the older ones.
Because of this, some later Mini Macs, like the Mini Mac 35 that I am working on, used flywheels and clutches that are not interchangeable with the more common earlier designs.
For whatever idiotic reason, both the flywheel and the clutch on this MM35 have a smaller thread size than all of my earlier minis. 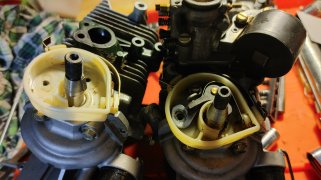 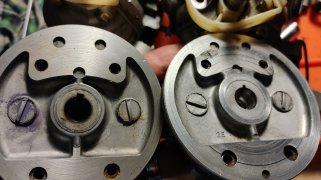 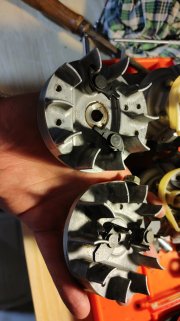 Well, after a few issues and stops to the project, the Mini Mac 30 is a runner!

The greatest problem was the starter drum ratchet.
The solution I went with was to just put a collar and rivet it in place. I don't think it'll go anywhere, but only time will tell.

The bar is still not my favorite thing to look at, but it and the chain work great. Some more fine tuning after a few more uses and this saw will take its place upon the shelf. Just waiting to be called into action once more...

On to the next project.
MacAttack

I have a handful of cracked recoils that still work, but I want to reinforce with a piece of metal pipe around the outside of the cup with some screws. I just need to measure the OD and find something that's very close.
Pics of the running MM30?
heimannm

Working on a Mini Mac 6 is much easier than trying to rebuild one of these. 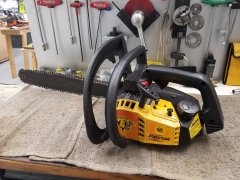 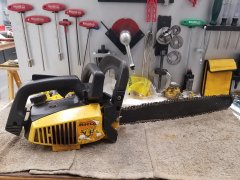 Once they are together and running the 300 Series saws are not bad, but getting them to that point can try a man's soul...

MacAttack said:
Pics of the running MM30?
Click to expand...

I'd also be interested in a pic of the collar and rivet solution.
Manic84

MacAttack said:
I have a handful of cracked recoils that still work, but I want to reinforce with a piece of metal pipe around the outside of the cup with some screws. I just need to measure the OD and find something that's very close.
Pics of the running MM30?
Click to expand...

PogoInTheWoods said:
I'd also be interested in a pic of the collar and rivet solution.
Click to expand...

Pictures? Wish Granted! (Unfortunately I'm no good at taking pictures)
As for the "collar" all I did was this:


At the last minute, I decided against tapping it. So I just drilled it and set in a 1/8 x 1/8 steel rivet through the collar, pulley and metal insert. Originally I wanted to and maybe should've used 1/8 x 1/4 rivets, but I think it's stable enough for now. 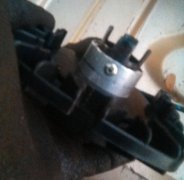 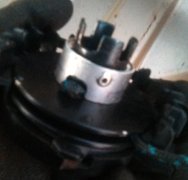 I used a piece of aluminum that I had laying around and it was a good fit. I cut it to size and got it down to where I wanted it.
After I was done, the first thing I did was cut out a notch for the knot.
By cutting out the notch first, I could see the bottom bevel of the pulley and used it to guesstimate where it ended, and where to start drilling. By using the top of the collar, I used a small screwdriver to judge the depth of where the collar ended and the pulley started. I used the same method to figure out how far the metal insert sat within the pulley. I then marked where both ridges were located, and where the insert more or less was and started drilling.

I could've drilled a little bit further up and been fine, but I settled on being a bit more towards the back of the insert.
As it says in the video the plastic expands when the insert is in the pulley, so that would be something to keep in mind.

I really don't see this failing, but we will see.

I think that pulley will hold up. I need to just find some aluminum or steel tubing that fits close enough to do the same repair in a few that I have.
Nice job on that 30!
PogoInTheWoods

Thanks for the vid and the pics! Nice work. Innovative and certainly looks like it will be an effective solution.

Question, though. Was any thought given to just going with the rivet approach and not even using the sleeve? I understand its reinforcing purpose, but would there still possibly be enough strength in the assembly without it?
MacAttack

PogoInTheWoods said:
Thanks for the vid and the pics! Nice work. Innovative and certainly looks like it will be an effective solution.

Question, though. Was any thought given to just going with the rivet approach and not even using the sleeve? I understand its reinforcing purpose, but would there still possibly be enough strength in the assembly without it?
Click to expand...

I am tending to think the additional support / reinforcement from the outer metal collar is necessary.
Case in point, I repaired a few of these pulleys simply by gluing the inner collar back in place with JB Weld. For the most part it works fine, but a kickback at just the wrong time will literally shatter the plastic cup into pieces. If I'd added the metal ring around the outside I think it would have held. The plastic cups all crack, which not only lets the break loose and spin, but can also easily be broken right off in pieces.
PogoInTheWoods

Gotcha. Good points. Maybe a strap of sorts surrounding the cup could be another approach given appropriate material? Just thinkin' out loud now...

I've done the sleeve/supporting ring on a few PM6 and MM starter pulleys, I will note that the steel insert is HARD and tapping is a challenge. A few of my repairs have one setscrew and one broke tap holding the sleeve/pulley/insert together.

Alright fellow Mini Mac fans, I have a weird question:
Has anyone ever seen the integrated (?) secondary screen within the MDC carburetors? I wasn't sure what I was looking at when I first saw it.

I can't tell if the screen is on the earlier MDCs only, since the later MDC I have doesn't appear to have this screen.
Maybe I'm a fool, and it was just a fluke and they all have it. (maybe even the Zama M1-M7 carbs too?)
I could be mistaken, or I'm overlooking it and it's been documented, but up until now I've never seen or heard it mentioned before.
heimannm

Do you see it here? 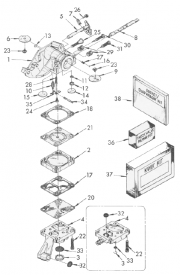 It's #32 in the diagram, and I definitely had in the carb from a Mini Mac 30 that I just rebuilt. It was an earlier MM30 with the old style recoil pawls, but it did have a chain brake.
Edit: the assembly is the "breakout" fuel pump cover illustration.
That screen APPEARED to have a small retaining ring.
heimannm

I think is it supposed to be in all of them but I would say the ones I've taken apart were about 50/50. Since both the PM6 and the Mini Mac models have a large felt fuel filter/wick in the tank I think the primary function of the screen is to catch any loose threads off the filter/wick...

Awesome diagram, thanks! But no, it’s not listed there. Looking back I should have been more specific.
It’s not #32, I’ve never seen anything like it listed on any of the IPLs I have or have seen.

I saw it inside/behind the brass seat for the inlet needle. I had shined a light into the inlet passage (anyone remember the isolated test?) and thought it was debris at first and tried to clean it out. (carb spray, low air pressure, USC) Then I looked again with the light, and noticed the more I looked at it, the more it looked like a secondary filter screen. So that was the conclusion I came to.

So I thought that was odd, since I’ve never heard of it, or even noticed it before. So to me, the fuel delivery system for the MDC is now: Felt Filter → First Inlet Screen (#32) → The "Secondary Screen" → Inlet Needle... At least for the ones that might have this screen.

I swear, what I saw looked like another screen. It was damn hard to see, I really had to get close to it, but I could see it through the seat. So now I'm wondering if they all initially have it, but when we hit the carb with air they shoot out? I have no idea. This is a real odd one for me. I don't think someone would've gone through the trouble of putting it in there.
MacAttack

Ive never noticed a screen under the inlet seat. And that doesn't sound like a good idea since you'd have to extract the seat to replace it.
Speaking of the wick filter in the tank...im looking for a replacement since they seem to get pretty brittle and crumbly. I found some 1/2" fibreglass wick that looks promising?
I'm not paying some idiot on Ebay $15-20 for a NOS tank wick....
Manic84

I know, it's weird. But it didn't look as fine as the screens we're used to. It looked more like the screens inside the inline filters you'd see on 4 cycle equipment.
You must log in or register to reply here.