I have been thinking about adding a new splitter to my equipment and today was the day.
I had been looking for the same 40 ton Countyline splitter that I bought 4 years ago at TS but I never could find one in store at any of the dozen or so stores nearest to me but I had no luck. Yesterday I stopped at the TS in Conroe and saw they had one in stock and it was marked down 10%= $200 off. After looking it over and asking about it I discovered it had been used and returned because it didn't run right. It was sent to be repaired and brought back to the store.
It had a small dent in the muffler, no big deal but it also had rust on the cylinder ram tube and rust on the beam and wedge.
I pulled the rope once and it started right up and ran fine but I don't know how it was used and with rust on the cylinder tube I passed on it.
Drove to Montgomery about 25 miles away and found a brand new 40 for the same 10% off, so I picked that one up instead.
I like the 40 ton unit for several reasons. The first is it's physically bigger with a taller wedge and a higher beam height. All the plumbing is 1'' instead of 3/4''. It has a bigger oil tank and bigger tires. I have about 1500 hours on my old unit and it still works like new but I want a back up unit and a second unit to set up two splitting stations.
I have a Gorillaback lift on my old unit but I don't think I will put one on the new one at this time. 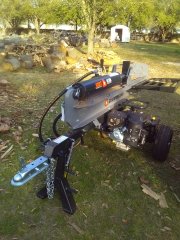 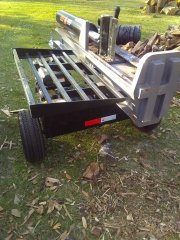 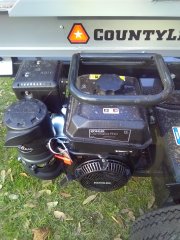 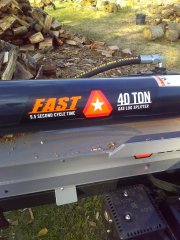 Good looking splitter. I sold my 15 year old 26 ton Brave splitter last summer. I bought a 37 ton Northern. I really love the Honda engine with the idle down linkage. Saves fuel but most importantly it saves noise! 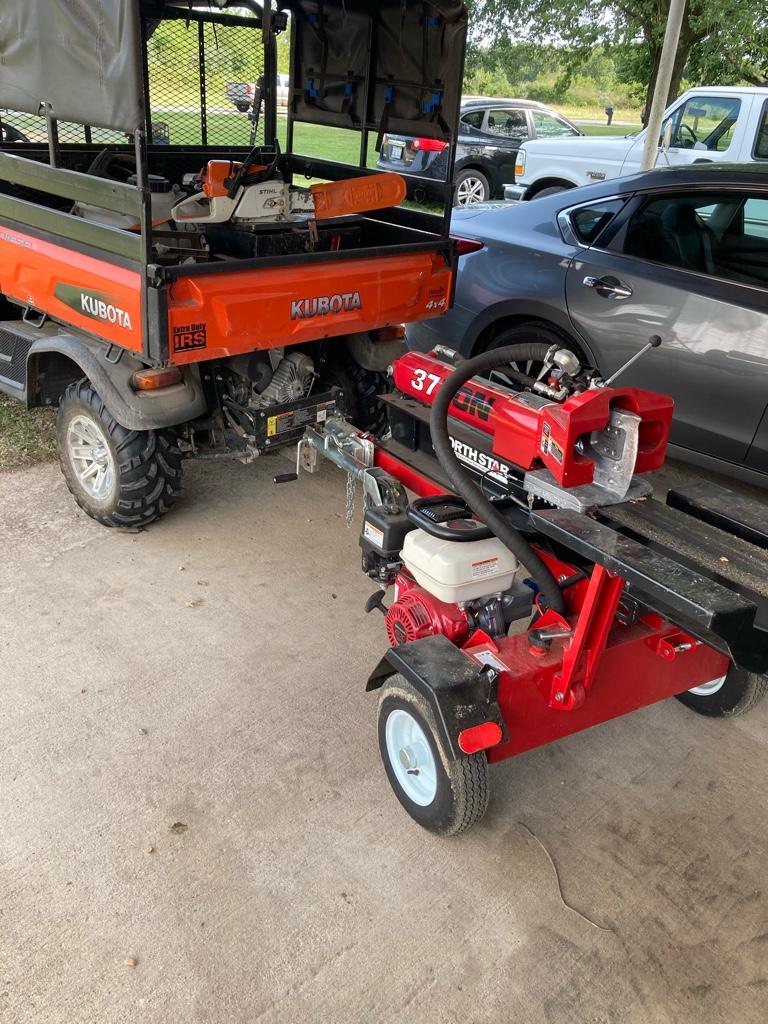 Sent from my iPhone using Tapatalk

Fast cycle, very nice. How many GPM is the pump?

Andyshine77 said:
Fast cycle, very nice. How many GPM is the pump?
Click to expand...

Figure it had to be above 22, nice unit.

I ran the new one for about an hour this afternoon at a low rpm to give it it's first heat cycle to start breaking it in. I have a few small mods to make like I did with my other one. First thing is to replace the oil tank vent cap with a water proof one. Then I need to get a digital rpm/hour meter and weld a piece of flat bar stock on the foot to keep wood from slipping off.

Nice. So the plan is to run both or to replace the old one?

Looks good. You going to put a 4-way on that?

My only complaint with my 30 ton tsc is how heavy it is. The 40 is obviously worse. Great splitter though.

I have the county line 22t with Kohler horizontal.
Cant complain, has never not split anything.

sirbuildalot said:
Nice. So the plan is to run both or to replace the old one?
Click to expand...

For now I'm keeping both. Since I sell 100+ cords a year I depend heavily on just one splitter. If it goes down for some reason I want a back up. I have one permanent slpitting station that has a pop up over it to help keep the rain off of it. But I find I need to keep moving it around when I change types of wood that I'm splitting. It's not hard to move but I do have to change my set up quite often. With two units I can keep one in one spot and use the other when I need to change areas. This gives me more options and a back up. Thats the same reason I have 3 saws. I can't depend on waiting to fix a broken piece of equipment to keep production going.

unclemoustache said:
Looks good. You going to put a 4-way on that?
Click to expand...

No 4 way. I don't think there any faster then a single wedge in that your trying to chase 4 pieces of wood rather then just two. This is not a commercial grade splitter and was not designed to use a 4 way. It all depends on the type of wood being split. Most strait grained wood generally splits very easy, while twisted grained and knotty wood can be tuff. One of the main reasons I like the 40 is that it comes with a 10'' tall wedge. Going from my old 22 ton unit to the 40, it was very apparent how much of an advantage the taller wedge is. That extra 3'' on the wedge height really helps to get through the stringy wood without having to flip it over and run it again to cut the stringy stuff.

ElevatorGuy said:
My only complaint with my 30 ton tsc is how heavy it is. The 40 is obviously worse. Great splitter though.
Click to expand...

Weight is not an issue for me and tells me it has more steel in it. Witch means it should be stronger and hold up longer then a light weight unit.

I actually paid less for this new one then I paid for the first one 4 years ago. I paid $1,999 + tax for the first one. I was looking the new one over in the shop last night and it's exactly like the one I bought 4 years ago. No changes what so ever. It's been raining since this morning so not splitting anything today.

That’s good. I also caught mine on sale and had a 10% seasonal coupon so the 30 ton was $1260 plus tax. I really wanted the north star with the Honda I just couldn’t justify the money.

ElevatorGuy said:
That’s good. I also caught mine on sale and had a 10% seasonal coupon so the 30 ton was $1260 plus tax. I really wanted the north star with the Honda I just couldn’t justify the money.
Click to expand...

I had been waiting for the seasonal sale this spring and I got lucky with this one. I would have waited a little longer but these 40 ton units are hard to find in store. By the way it's the beginning of spring here in south east Tx. I gotta get inventory built back up before the summer heat sets in. I'm gonna wait till I get the mods done before I put this new unit to work. Meanwhile I'll keep working my old unit.
I have worked the old unit hard for the past 4 years and have 1500 run hours on it and it's been a solid unit with zero issues so I'm confident this one will be the same. Most of the wood I split a 22 ton unit is all you need but I also split a lot of pecan and live oak so the extra tonnage makes working the hard stringy stuff a lot easier. My old 22 ton unit had a hard time splitting pecan and the live oak would just bring everything to a grinding halt.
All the smaller ones seem to have a lower beam height and I'm kinda bent over when running them. This one has a higher beam height and is just right for me.