There's no pressure plate on my logging winches .

I think you're on the right track. Being that you have a lever and wedge design you should be able to apply more than enough force. A hydraulic cylinder could easily apply more force but would be slower to disengage and would also cause potential problems with warping or bending

Ok, another update!
I pulled the last 14' piece of the tree in today, I set the tractor at about 1500 rpm's, it came in rather quickly

My tractor idles at about 800-900 rpm's
The Farmi and Fransgard both of which are commercially made units both have very similar set ups. The Farmi uses 6 pads and the drum is forced over into the sprocket, the Fransgard uses only 3 pads and also forces the drum over against the sprocket, the Norse is also a commercial unit, it is a little different in that it forces the sprocket over against the drum, it also uses just 3 pads.
I did some re work on the engagement mechanism today. I noticed that my wedge design was flawed in that as it turned to push, it also got loose at the other end (picture two wedges from a wheel of cheese and rotate one of them while keeping it level on one side). Then I had an epiphany, I need three wedges on the same diameter circle! While poking around TSC I spotted the steel halves of a Lovejoy connection, a light bulb went off! I bought two of them, took a cutting wheel and cut all the square tips into angles. One for the drum side and one for the tractor side I was limited to width at this point so I had to slice the parts on the band saw, that was a ***** trying to figure out how to hold them but I got it!
I haven't tried it yet, I'm hoping the angle isn't too steep but I should be able to force it with a longer handle? Or hydraulics
I did discover in doing this that the little thrust bearing I was using was destroyed, I think partially because the mechanism I was using was only pushing on one side and not equally. I removed it and greased up a 1" washer for the time being, I may need to get a bronze one of that size.
I suppose if this doesn't work I'll have to look into buying some Fransgard or Norse pads.
Here are some pics:
lovejoy jigged up to slice after it was cut on the angles:

and with it in place 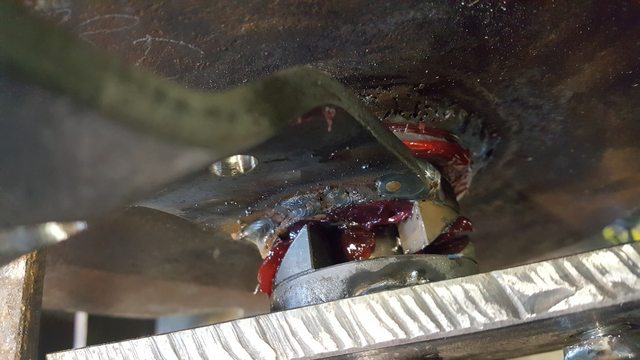 So at least I even pressure around the thrust area , we will see
I forgot to add that now with this mod I have attained free spool ability

Got some paint on her today 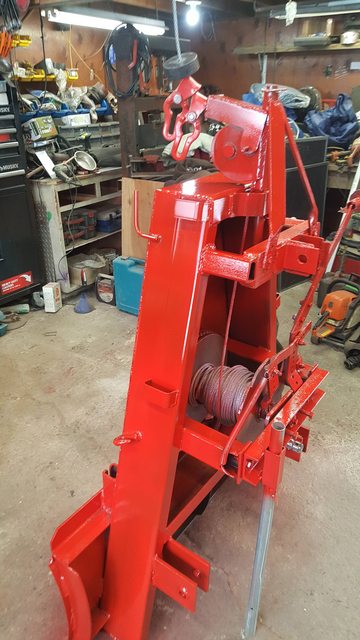 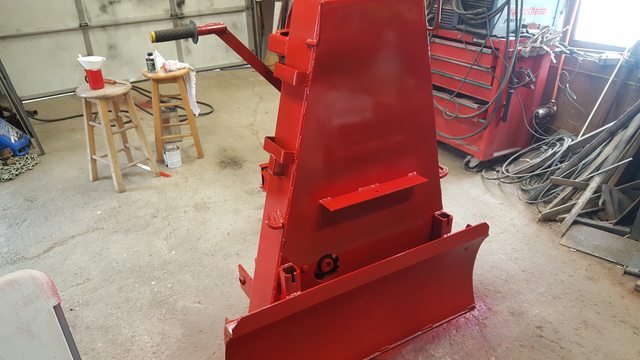 I loaded the tractor up and hauled it over to my buddies property to skid some trees for next years firewood. The first tree I hooked to was a 24' piece about 12" across at the butt, yanked it to the winch like a champ! I ran that one to the pile and came back for another larger Maple, I knew I couldn't haul the entire thing so I cut about 20' off the bottom which is about 20-21" across. I hooked it up, gave the lever a push and I heard a clunk, looked and didn't see anything too obvious so I gave it another push and heard a terrible clank,!
The Lovejoy connectors I made with the ramps the other day must be made from Chinese steel, the thing broke right in half

So I hauled it all home and parked the tractor in the garage. I'll pull the winch apart tomorrow and see if I can come up with a plan "C" or maybe back to plan "A"

Let's discuss the clutch for a bit. Can anyone confirm If I take the clutch off and cut every other pad off would it work any better? IE: grip more?
Or while I have it in the garage should I look for some brake pads from an ATV or something?
Thanks,
Dave

I can't remember if it was mentioned but have you read agvg's thread on his winch rebuild ?

Chit all to heck , some of the pics are gone

dancan said:
I can't remember if it was mentioned but have you read agvg's thread on his winch rebuild ?

Yes, I read it all before the pics went missing, he and I had exchanged some pm's and i did let him know that the pics are missing. It was a useful thread for me during my build for sure.

dave_dj1 said:
Yes, I read it all before the pics went missing, he and I had exchanged some pm's and i did let him know that the pics are missing. It was a useful thread for me during my build for sure.
Click to expand...

Did forgot about the missing pics, must fix them.

Well here's today's update.
Me and a buddy took the setup to the woodlot today for some testing

I feel the testing went well. One thing I cannot figure out is why I cannot get free wheel with the ramp set up. I have tried everything. I have started making a set of ramps on a piece of 3.5" solid bar that I had. The poor little HF bandsaw cut it like a big girl. Each slice is 5/8" thick. The hardest part so far has been to drill the 1" hole, I got them done but the chuck wobbles so bad on my Rigid drill press that I don't think they are perfectly round!
With the last set up with the ramps made from the Lovejoy connectors I had good free wheel of the drum. Today was a PIA having to pull the cable while not only the drum in turning but so is the clutch, chain and PTO shaft ugh!
I think the winch did OK other than that.
Here are a couple pics and a link to a video I made on Youtube.

Update for today.
I tore the whole thing apart, found (which I had a suspicion) the shaft was not perfectly square to the front if that makes sense, the rear support (one facing tractor) had to be moved up and over a tad. I hogged the holes out with the plasma cutter and then once I got it all where I wanted it I drilled some locating holes in the pieces so now I can insert a couple of punches and it will be aligned.
Second issue I found was a bad bearing on the sprocket, there are two, the outer most one was sticky so I ordered two new ones from McMaster Carr. I think the reason for the bad bearing is two fold, one it was being pushed on by the little thrust bearings I was using but only pushing on the very center, I don't think these bearings like side loading. And two the DOM tubing it is going into is not perfectly round or proper size. I'll figure out how to deal with that when the time comes

Third issue I found was some galling on the thrust washer at the ramp piece and drum, I greased them but I guess not enough or because the ramp only exerts pressure in one spot it's not spread around. I hope to solve this by installing some high load bronze oil impregnated washers from McMaster. They come in two sizes for 1" shaft, I ordered the larger size, 2 7/8".
My thought here is it will transfer the pressure to the DOM and not the bearing and hopefully the new ramp I'm making will more equally distribute the pressure.
It is a learning experience for sure.
Stay tuned for more updates when I get the parts.

Well the "new ramp" design was a bust!
Oh well, onward and upward.
I made some new ramps out of 2.5" DOM .250 wall that I had. I made a double ramp so I'm hoping that it will work. I also reinforced the other side of the winch with a piece of 4" channel, I think it will help. I can't wait to test it out.
BTW I put the clutch back in, at least that had some grip...LOL I can get some serious force on it now so hopefully it will work. 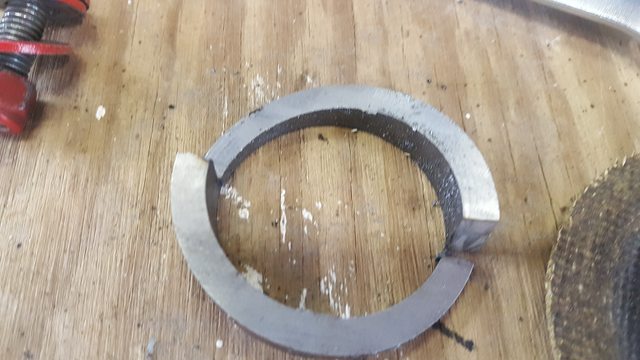 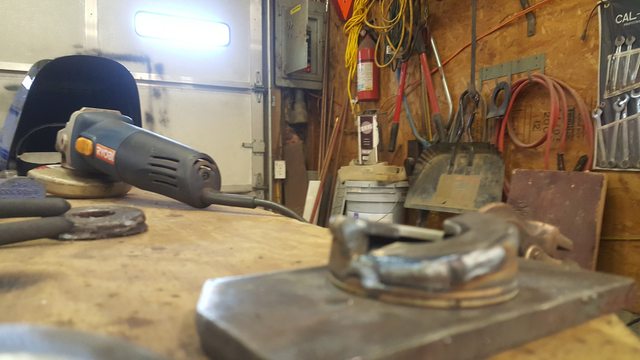 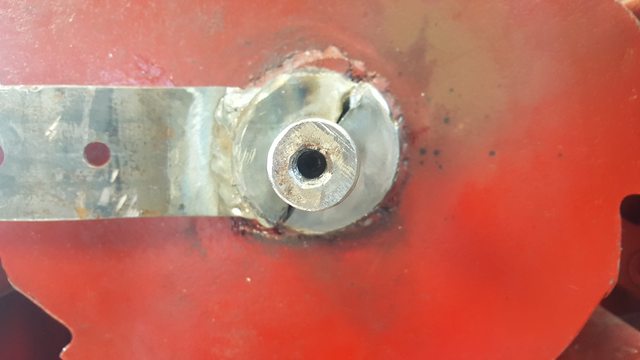 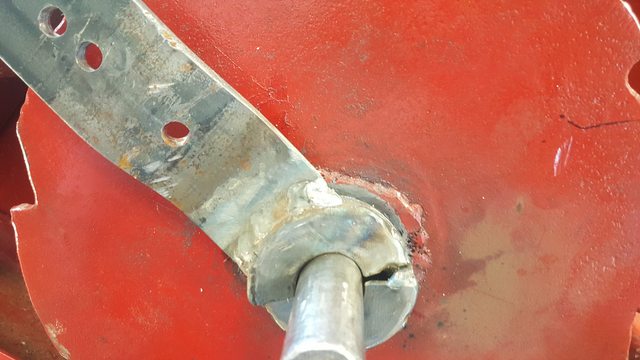 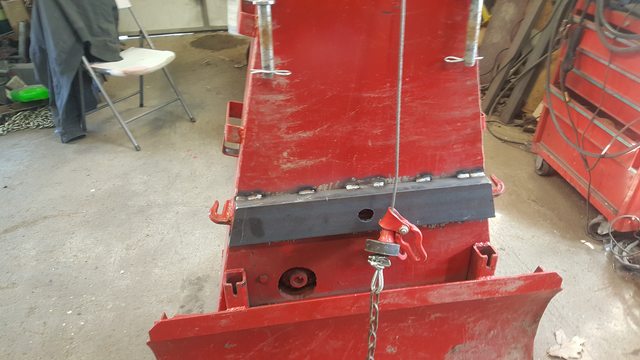 Well I am happy to report that the little winch that could, did! I gave it a pretty good workout this morning, pulling two logs at a time and other than an adjustment on the adjuster screws it worked pretty good. I am pleased with it's operation and call it a win!
Thanks to all for the help, support and advice.

A short video I took today , it's still working well.

Here is one my buddy took the other day;

Hi all, I just wanted to check in with a report about my logging winch.
I hauled it to the mountain last week and hauled a few logs (about 3 cord) and it worked great.
My buddy is planning on using it for a decent size clearing behind his house this winter.
In case you didn't read "Firewood tractors" thread I have a brand new Kubota L2501 4x4 HST with R4 tires and loader.
S

Nice job on logging winch build. I got a lot of good ideas and info but I was looking for one part number and name of place you got it from, and that would be the large 60 tooth sprocket info please. Thanks

dancan said:
There's no pressure plate on my logging winches
Click to expand...

Information on wood structural strength by species and dimensions?

S
404 conversion to a Homelite Wiz